Skip to content
American tanks and armored vehicles headed for Tbilisi, Georgia, on Monday, local media reported. The “largest” NATO-led war games with Georgia are part of the bloc’s recent activities in the vicinity of Russia’s borders.

US Abrams tanks and Bradley armored personnel carriers (APCs) made their way through western Georgia to Tbilisi, local media said, noting that stops have been made so that locals can get a closer look at the military vehicles.

The war games with the Caucasian state kicked off at the Vaziani and Camp Norio training areas near Tbilisi on Sunday.

The drills, considered “the largest ever” between Georgia and NATO, will run for two weeks, with some 2,800 military personnel from NATO states and their partners – the US, UK, Germany, Turkey, Slovenia, Armenia, Ukraine and Georgia – taking part. The latter three states are not members of the alliance but “voluntarily contribute” to NATO forces, according to a US Army Europe statement. 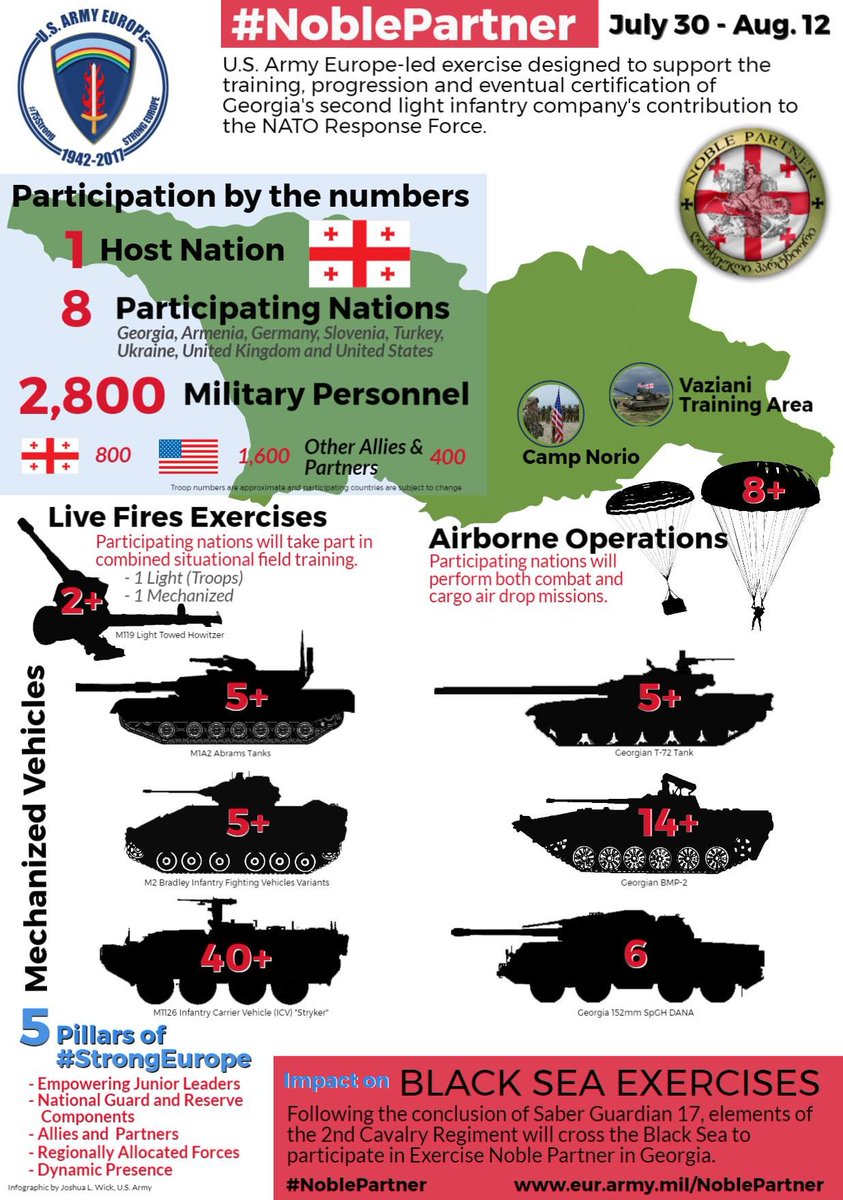 The maneuvers are aimed at “the training, evaluation and eventual certification of Georgia’s second light infantry company contribution to the NATO Response Force (NRF) for 2017,” the US military said.

The hosting country considers the war games a way to provide stability for the region, moving the county closer to integration into NATO.

“These exercises will help Georgia to get closer to NATO standards and to strengthen stability in the whole region,” Georgian Prime Minister Giorgi Kvirikashvili said at the opening ceremony on Sunday, as cited by Reuters.

During a visit to Georgia, US Vice President Mike Pence will attend the military exercises and address participants on Tuesday.

Noble Partner is one of 18 drills being held in seven countries of the Black Sea Region, close to the Russian border, in summer 2017, according to the US military.

The war games follow separate US-led drills in the region – Saber Guardian 2017 – which have just finished in Hungary, Romania and Bulgaria. Around 25,000 service members from 22 ally and partner nations were involved in the drills, making them “the largest of the 18 Black Sea region exercises this year.”

Moscow has long voiced concerns about to NATO’s large-scale war games near Russia’s borders. While the scale of the Western drills exceed Russian ones, a top US commander warned that the Zapad 2017 Russia-Belarus drills, planned for September, could be a “Trojan horse” for Europe. Both Minsk and Moscow refuted the allegations, saying they are made to “artificially justify” the NATO military buildup around Russia.

According to Belarusian Defense Minister Andrey Ravkov, who spoke to TASS earlier in July, NATO and the OSCE, as well as more than 80 foreign observers, are invited to the drills since there is “nothing to conceal.”

Brushing off NATO’s concerns on the Russian-Belarusian drills, Moscow’s envoy to NATO, Aleksandr Grushko, said earlier this month that the bloc needs “to curtail its own military activities, which are groundless and contradict the real security needs.”