LONDON—The synthetic CDO, a villain of the global financial crisis, is back.

A decade ago, investors’ bad bets on collateralized debt obligations helped fuel the crisis. Billed as safe, they turned out to be anything but. Now, more investors are returning to CDOs—and so are concerns that excess is seeping into the aging bull market.

In the U.S., the CDO market sunk steadily in the years after the financial crisis but has been fairly flat since 2014. In Europe, the total size of market is now rising again—up 5.6% annually in the first quarter of the year and 14.4% in the last quarter of 2016, according to the Securities Industry and Financial Markets Association.

Collateralized debt obligations package a bunch of assets, such as mortgage or corporate loans, into a security that is chopped up into pieces and sold to investors.

The assets inside a synthetic CDO aren’t physical debt securities but rather derivatives, which in turn reference other investments such as loans or corporate debt.

During the financial crisis, synthetic CDOs became a symbol of the financial excesses of the era. Labelled an “atomic bomb” in the movie “The Big Short,” they ultimately were the vehicle that spread the risks from the mortgage market throughout the financial system.

Synthetic CDOs crammed with exposure to subprime mortgages—or even other CDOs—are long gone. The ones that remain contain credit-default swaps referencing a range of European and U.S. companies, effectively allowing investors to bet whether corporate defaults will pick up.

Desperate for something that pays better than basic government bonds, insurance companies, asset managers and high-net worth investors are scooping up investments like synthetic CDOs, bankers say, which had largely become the preserve of hedge funds after 2008.

Investment banks, which create and sell CDOs, are happy to oblige. Placid markets have made trading revenue weak this year, and such structured products are an increasingly important business line.

Many investors, though, still view the products as unnecessarily complex and are concerned they may be hard to offload when markets get choppy—as they did in the last crisis. 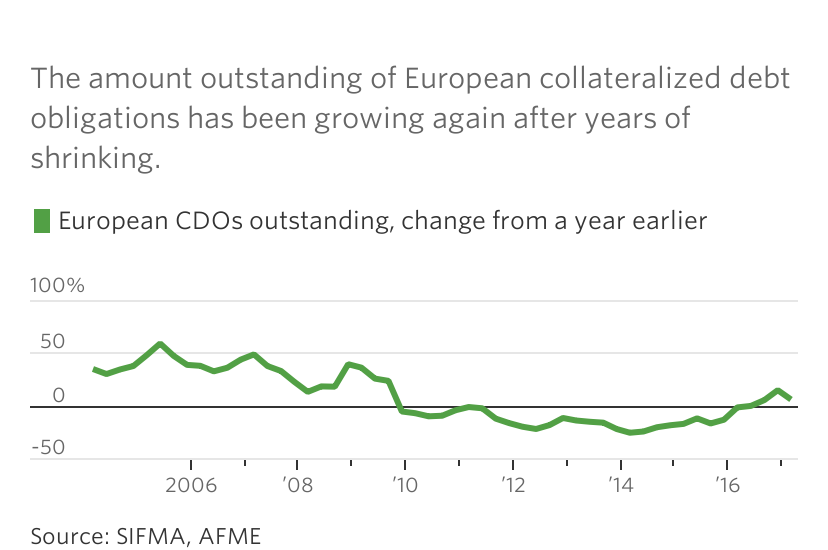 “We don’t see that demand from our clients and we wouldn’t recommend it,” said Markus Stadlmann, chief investment officer at Lloyds Private Banking, citing concerns over the products’ lack of transparency and lack of liquidity, meaning it could be hard to offload a position when needed.

The return of synthetic CDOs could present other risks. Even if banks are currently less willing to loan money to help clients juice returns, credit default swaps can be very leveraged, potentially allowing investors to make outsize bets.

Structured products accounted for nearly all the $2.6 billion year-on-year growth in trading-division revenue at the top 12 global investment banks in the first quarter, according to Amrit Shahani, research director at financial consultancy Coalition.

“There has been an uptick in interest in any kind of yield-enhancement structure,” said Kokou Agbo-Bloua, a managing director in Société Générale SA’s investment bank.

The fastest growth this year has come in credit—the epicenter of the 2007-08 crisis. The top global 12 investment banks had around $1.5 billion in revenue in structured credit in the first quarter, according to Coalition, more than doubling since the first quarter of 2016. Structured equities are largest overall, a business dominated by sales of derivatives linked to moves in stock prices, with revenue of $5 billion in the first quarter.

“The low-yield environment hurts,” said Lionel Pernias, a credit-fund manager at AXA Investment Managers. “So there are a lot of asset owners looking at structured credit.”

These days, the typical synthetic CDO involves a portfolio of credit-default swaps on a range of companies. The portfolio is sliced into tranches, and investors receive payouts based on the performance of the swaps. Those investors owning lower tranches tend to get paid more but are subject to higher losses if the swaps sour.

For instance, an investor can sell insurance against a pick-up in defaults in the lowest—or “equity”—tranche of the iTraxx Europe index, a widely traded CDS benchmark that tracks European investment-grade companies. In return, the investor will receive regular payments, but those will shrink with every company default and stop altogether once 3% of the portfolio has been wiped out through defaults.

During the financial crisis, synthetic CDOs based on standardized indexes like iTraxx Europe suffered losses as traders expected defaults to pick up. Investors who held on, though, have since done “great,” says Mr. Champion.

Investors who agreed to insure against a rise in defaults for 10 years on the equity tranche of the iTraxx Europe index in March 2008 have made roughly 10% a year, according to an analysis of data from IHS Markit . That’s despite defaults from two companies in the index: Italian lender Monte dei Paschi di Siena and Portugal Telecom International Finance BV.

In contrast, investors who sold insurance on tailored CDOs packed with riskier credits—such as Icelandic banks or monoline insurers—would have been on the hook for losses.

Synthetic CDOs have evolved since the crisis, bankers say. For instance, most are shorter-dated, running up to around two to three years rather than seven to 10 years. Some banks will only slice and dice standardized CDS indexes that trade frequently in the market rather than craft tailored baskets of credits.

Postcrisis regulations have forced banks to set aside more capital against these transactions and use less leverage. That has encouraged banks to parcel out the risk to clients rather than keeping it on their own books.

“There is a lot more regulation and scrutiny and a lot less leverage,” said Mr. Agbo-Bloua.

Mr. Champion says he only trades tranches based on standardized CDS indexes, which he says are easier to buy and sell than more tailored products. Currently, he sees value in selling default protection on super-senior tranches.

Mr. Champion said he has to lay down only around $1 million in upfront margin costs on a $100 million trade of this kind.

“The cost of leverage in the derivatives space is very low,” he said.

Any expectations of default rates picking up could inflict losses on synthetic CDOs, though at the moment analysts forecast they should decline. Still, the memory of how the market behaved in the immediate aftermath of the financial crisis is likely to keep many investors on the sidelines.

“If you’re the person responsible for buying the synthetic CDO that suddenly goes wrong, your career risk is bigger than if you’d bought a plain vanilla bond that goes wrong. It has a bad name,” said Ulf Erlandsson, a portfolio manager at start-up hedge fund Glacier Impact, who until recently oversaw credit for one of Sweden’s public pension funds.

Write to Christopher Whittall at christopher.whittall@wsj.com and Mike Bird at Mike.Bird@wsj.com