Investors are fleeing U.S. stocks in a way they haven’t since 2004.

For 10 straight weeks a total of $30 billion has left U.S. stocks, marking the longest streak of outflows since 2004, Bank of America Merrill Lynch said in a Thursday report, citing EPFR Global data.

Investors turned instead to emerging markets and European and Japanese stocks, which saw $36 billion in inflows over the last 10 weeks, the report said.

BofAML’s breakdown of last week’s fund flows pointed to more aversion to risk among investors, and could add to some analysts’ worries about deteriorating market internals.

The 10-week outflow from U.S. stocks comes despite the S&P 500’s nearly 1 percent gain this quarter and a record high on Aug. 8.

The report also pointed out the turn away from U.S. stocks coincided with the late June surge in the euro against the U.S. dollar to its strongest in nearly a year, after comments from European Central Bank President Mario Draghi suggested higher inflation and tighter monetary policy soon in the euro zone.

The euro subsequently climbed to its highest in more than two years in early August, and traded slightly below those levels near $1.186 Friday. Draghi is scheduled to speak later Friday afternoon at an annual meeting of central bankers in Jackson Hole, Wyoming.

The defensive utilities sector was the only U.S. stock sector to see slight inflows in the last week.

Investors also piled into Treasury bonds, which saw their greatest inflows in 10 weeks at $900 billion. But riskier high-yield debt posted $2.2 billion in outflows, its eighth week out of 10 of withdrawals, the report said.

That said, analysts don’t expect the defensive turn to result in a large market downturn.

“This is definitely weaker U.S. equity inflows but still net positive and my sense is that positioning is still long and the VIX back at 11 shows there is still complacency,” Ilya Feygin, managing director and senior strategist at WallachBeth Capital, said Friday. He estimated U.S. stock exchange-traded funds, passive investment products which have risen in popularity over mutual funds, gained $6.1 billion in net inflows since June 30.

In addition, BofAML said its proprietary Bull & Bear indicator did not trigger a “sell” signal, meaning the market still remains in a rally mode.

In investing, a good time to buy is when worries and warnings are abundant. Now appears to be that time for stocks.

The reason for the worries and warnings becoming so loud now is the mounting consternation about the market not behaving as expected. Over a month ago, the belief in a coming downward adjustment seemingly reached critical mass:

“About 36% of investment managers find the U.S. stock market undervalued or fairly valued at current levels, according to a quarterly investment manager survey performed by Northern Trust Asset Management. That’s the lowest reading in the history of the survey, which began in the third quarter of 2008.

“Nearly two-thirds of investors—65%—say the U.S. equity market is overvalued, the highest percentage on record.”

In spite of that strong bearishness, the market has continued to show resilience. Normally, that contrarian reality would sow doubts about the worries and warnings. However, this time it has produced increased frustration, underscored by investor action.

“The latest week of outflows marks the 10th straight week of withdrawals, the longest in more than a decade, and internal positioning changes also indicate investors are becoming more defensive, the report says.

“The outflows occurred despite the S&P 500’s nearly 1 percent gain this quarter and a record high on Aug. 8.”

Now that the warnings are widespread yet unfulfilled, articles have shifted to scary visions of what could happen.

The 1987 stock market crash is a (the?) popular choice now. Based on a few minor similarities (while ignoring the many major dissimilarities), the Black Monday selloff is highlighted. These articles are grossly misleading because the actual causes of the 1987 run-up and crash had little or nothing in common with today’s market. Additionally, the economy and financial system were dissimilar. Finally, and perhaps most importantly, the broad-based investor optimism before the 1987 crash has been absent from the 2017 stock market. Look at the chart below to see 1987’s optimistic bubble that then popped, and compare it to the mild, controlled rise in 2017. 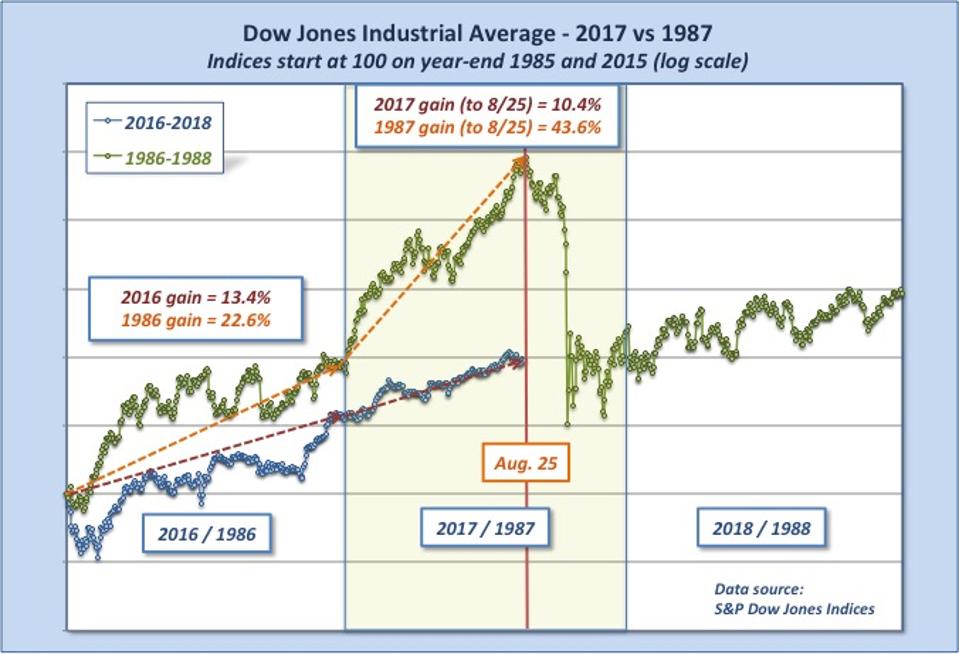 So, why was the 1987 crash chosen? For two flawed reasons.

Second, because 2017 ends in a “7” just like 1987. This idiotic reason gained a following when Barron’s and others saw fit to write about it. See “Sorry, Barron’s – The 2017 Stock Market Is Not Cursed Because It Ends In ‘7’” for an explanation of the huge flaws in proposing such a theory.

In spite of the silliness in comparing the two years, here are just some of the articles that use the 1987 crash as a vision of what could happen now:

Beliefs and emotions, when they become widespread and coalesce around a particular view, are an excellent contrarian indicator. Like a pendulum, they reach an extreme point, and then begin to reverse. That reversal – call it a move back to common sense and normality – can produce a strong investment shift.

In today’s market, that means owning stocks is desirable. Not only could that selling mentioned above reverse, it could spur an increase in demand from the conservatively allocated portfolios of both individuals and institutions.

Are you having a hard time believing that all the negativity is wrong-headed? Then, try creating a mental and emotional picture of a true bull market, where you own growth stocks/funds, your holdings have nice gains that are increasing, analysts are discussing positive economy/company developments, investing advice is focused on optimizing capital gains and articles regularly describe how well things are going.

Got it? Now compare that picture to today. Not even close. Therefore, clearly, we are not in an overvalued, optimistic, risk-taking time in which investors are counting their winnings with complacency.