“It’s like a nightmare come true” some Jews in Germany said.

The Jewish community largely condemned Sunday’s election victory of the far-right party, known in Germany as AfD, which garnered some 13 percent of the vote in Sunday’s national poll, making it the country’s third largest faction in parliament.

Yet the party derided for anti-Semitic, xenophobic views redolent of the Nazis is also staunchly supportive of Israel, one of a number of right-wing populist parties in Europe that have tried to make common cause with Israel’s tough stance toward terror and self-styled position as a forward bulwark against Islamic extremism.

Most German Jews repudiate the AfD as anti-Semitic, pointing to its anti-immigration and anti-Muslim platform and arguing that whoever targets Muslims and other minorities will sooner or later seek to harm the Jews’ religious freedoms.

“It is abhorrent that the AfD party, a disgraceful reactionary movement which recalls the worst of Germany’s past and should be outlawed, now has the ability within the German parliament to promote its vile platform,” said World Jewish Congress president Ron Lauder.

“This result is a nightmare come true,” declared Charlotte Knobloch, chairwoman of Munich’s Jewish community and former president of Central Council of Jews in Germany.

“With the AfD, exclusion, inwardness, aggression, contempt for humanity, conspiracy theories, volkisch nationalism, neo-Nazism, violating the constitution, Holocaust denial, anti-Semitism, racism, anti-religiousness, hostility toward the media and Europe, revisionism and historical relativism move into the Bundestag and its national and international bodies,” she said. 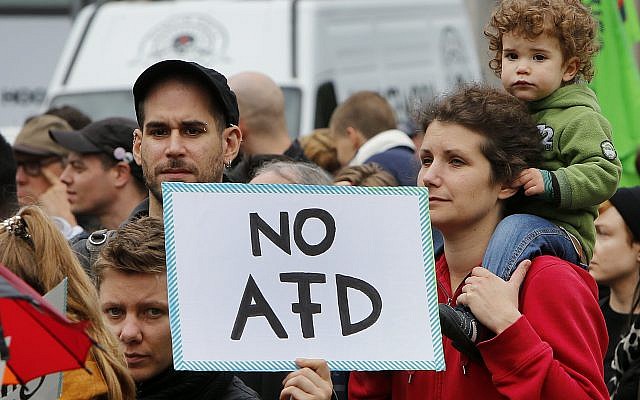 Past statements from senior AfD officials suggested a desire to change Germany’s admission of guilt for the Holocaust and admiration for Wehrmacht soldiers during World War II. Despite intense efforts, party officials were never quite able to get rid of the impression that it had become a platform for anti-Semites, racists and other xenophobes.

But, like many far-right parties in Europe and elsewhere, the AfD presents itself as staunchly supportive of Israel.

According to a wide-ranging poll commissioned by a group promoting German-Israeli relations, most AfD politicians profess to care deeply about Israel’s security, support Prime Minister Benjamin Netanyahu’s demand that the Palestinians recognize Israel as a Jewish state, reject unilaterally recognizing a Palestinian state, and generally support a stronger relationship between Jerusalem and Berlin.

Nearly 90% of the 35 AfD members who were surveyed totally or somewhat support Chancellor Angela Merkel’s dictum that “Israel’s security is Germany’s raison d’etre.” Two said they oppose the statement and two had no opinion.

A quarter of those polled had been to Israel. 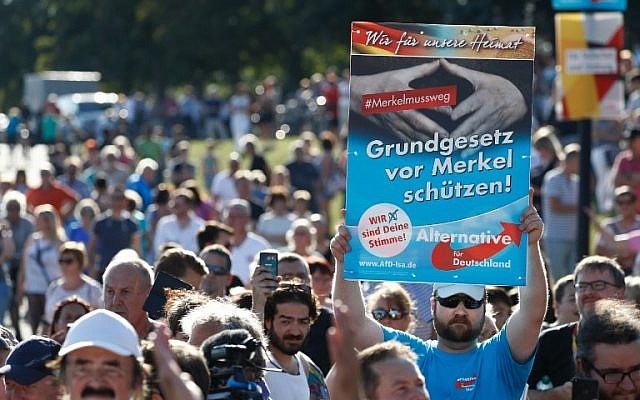 Over half of the AfD respondents said they “totally” agree with the statement that support for the anti-Israel Boycott, Divestment and Sanctions movement to be anti-Semitic; no other major party had such a strong opposition to BDS.

Seventy-seven percent those polled agreed with the statement that anti-Zionism is a form of anti-Semitism; 23% disagreed.

“Criticizing the State of Israel and on Zionist behavior is not anti-Semitism,” one polled AfD politician said when asked to comment on his response.

Some 88% said Israel’s 70th birthday next year was a reason for Germans to celebrate, while fewer than 4% disagreed with that statement. (For comparison, at the Social Democrats of Martin Schulz — which came in second in the national elections, ahead of the AfD — 11% felt that Israel’s anniversary was no reason to celebrate.)

“As long as the Germany provides Islamic regimes such as Turkey or Saudi Arabia with arms, there is no reason why Israel, as a pro-Western, democratic state should be excluded from arms deals,” said Beatrix von Storch, the party’s deputy spokesperson. 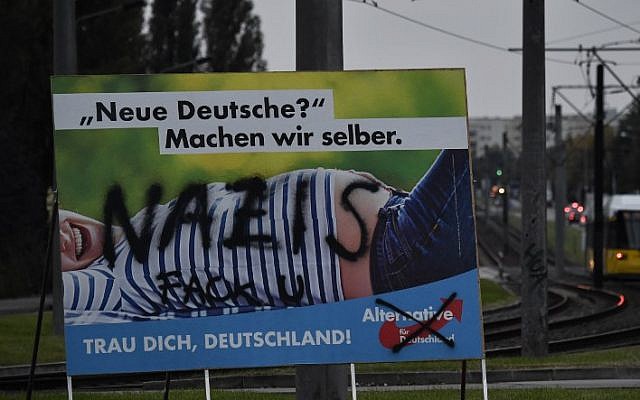 Israel’s Foreign Ministry and the Prime Minister’s Office on Sunday evening remained mum on AfD’s strong showing in the German elections, though the PMO tweeted congratulations to Merkel, calling her a “true friend of Israel.”

Congratulations to Angela #Merkel , a true friend of Israel, on her re-election as Chancellor of Germany.

Jerusalem has a complicated relationship with populist European far-right parties, which thrive on anti-Muslim sentiment, but enthusiastically embrace the Jewish state.

MK Nachman Shai, an opposition lawmaker who chairs the Israel-Germany Parliamentary Friendship Group, said Germany’s democratic elections must be respected, but at the same time called them “a great warning sign” for Israel and the Jewish people.

“The rise of the extreme right in Germany is indicative of dangerous moods that are growing stronger,” he said. “Xenophobia, racism and extremism have conquered a significant portion of the German public and prove that the democratic stratum is fragile and vulnerable.”

Every single AfD candidate polled said Germany should use its financial aid to the Palestinians to pressure them into ceasing its incitement to and glorification of terrorism.

Two-thirds of AfD candidates do not believe that West Bank settlements are the main obstacle to Israeli-Palestinian peace; 19% do think so. Also, two-thirds said they “totally” disagree with the European Union’s decision to label Israeli products made in the settlements — no one expressed support for the idea (21% tended to disagree with the policy and 12% had no opinion)

Sixty-nine percent “absolutely” agreed with the statement that a comprehensive peace treaty needs to include the recognition of Israel as a Jewish state. Only 3% “absolutely” disagreed. 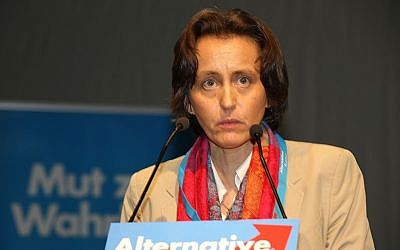 “The recognition of Israel’s right to exist the precondition to every peaceful solution of the Arab-Israeli conflict. This emphatically includes the recognition of Israel as a Jewish state,” von Storch said. “Like any other nation, Israel has the natural right to protect its citizens, secure its borders and safeguards its cultural identity.”

When it comes to Holocaust education, however, the AfD scorecard doesn’t look so great. While 100% of respondents from the center-left, the center-right parties, and the Greens, said they “totally” agreed that it was important to teach the young generation about the Shoah, at the AfD, 38% “tend to” agree and 6% “tend to” disagree.