South Korean President Moon Jae-in has called for the long-delayed transfer of its wartime operational control (OPCON) from the Pentagon to be speeded up, and says the country must develop its own military capacity to “punish” North Korea’s “provocations.”

Between 1950, when General Douglas McArthur took charge of the South Korean army, and 1994, a US general served as its commander. Since then, Seoul has taken back peacetime control of its armed forces, but would delegate command to the US in case of a conflict, though Korean politicians do formally have a veto.

The handover of OPCON to Korean generals has been discussed, touted and negotiated for decades, but in 2014 Seoul asked Washington to postpone it indefinitely, to give the Asian country a chance to build its “core military capabilities.”

Moon, elected in May this year, now believes that South Korea has to be more proactive in strengthening its army, in the wake of a series of missile and nuclear tests by the North. 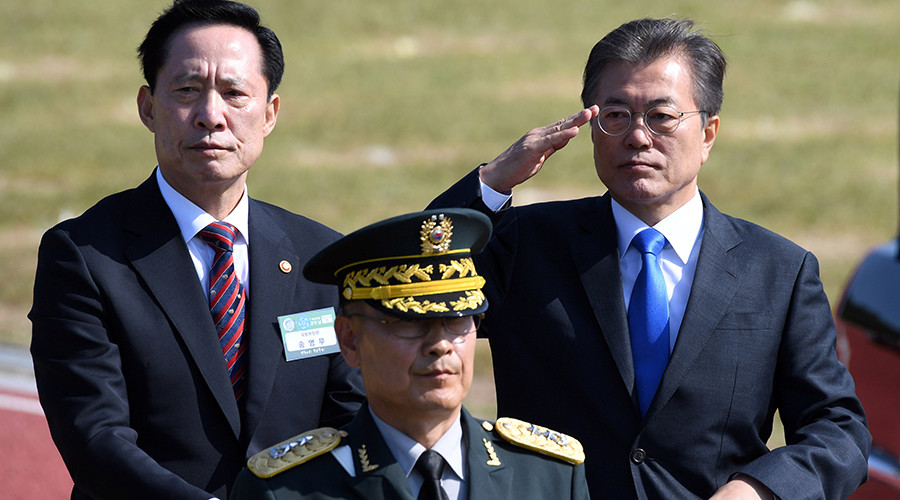 South Korean President Moon and Defense Minister Song review the troops during a commemoration ceremony marking South Korea’s Armed Forces Day
“Without strong defense, we can neither protect nor make peace,” Moon told the 3,700 military officers in attendance at an occasion celebrated with pomp. “Securing counter capabilities against North Korean nuclear and missile threats is the most urgent task. We must further strengthen our offense-based defense system Kill-Chain and Korean missile defense system.”

South Korea currently operates a so-called ‘three axis’ defense system against its northern neighbor. The Kill Chain system would carry out a pre-emptive first strike against hostile launch sites, the Korean Air and Missile Defense (KAMD) system would attempt to intercept any missiles that would cross the border, and the Korea Massive Punishment and Retaliation (KMPR) plan intends to obliterate the entirety of North Korea if its missiles do hit targets down south.

“We will stand up against reckless provocations with strong punishment,” Moon promised in his speech.

Korea’s conservative opposition parties have said that the handover could weaken the bond between Seoul and Washington, lessen the resources the US spends on its Asian ally, and further embolden Pyongyang.

The US currently stations 28,500 troops on South Korean territory, where it has deployed its sophisticated THAAD missile defense system – despite objections from China and Russia – and conducts massive annual joint drills.

But Moon believes that the ties across the Pacific are secure, and that South Korea is strong enough for self-reliance.

“I believe our military has sufficient capabilities. Together with the people, I have confidence in our military,” said Moon.