Armoured vehicles have been spotted heading towards Harare, Zimbabwe‘s capital, a day after the army commander threatened to “step in” to calm political tensions over President Robert Mugabe‘s sacking of his deputy.

Eyewitnesses said military vehicles were also blocking major roads outside the city, with the ruling ZANU-PF party, led by Mr Mugabe, accusing the head of the army, General Constantino Chiwenga, of “treasonable conduct”.

Mr Mugabe – the only leader Zimbabwe has known in 37 years of independence – sparked a rift with the military by sacking his Vice President Emerson Mnangagwa, 75, last week. The long-serving veteran of Zimbabwe’s 1970s liberation wars had been viewed as a likely successor to the President.

However, his downfall appeared to pave the way for Mr Mugabe’s wife, Grace, to succeed her 93-year-old husband. 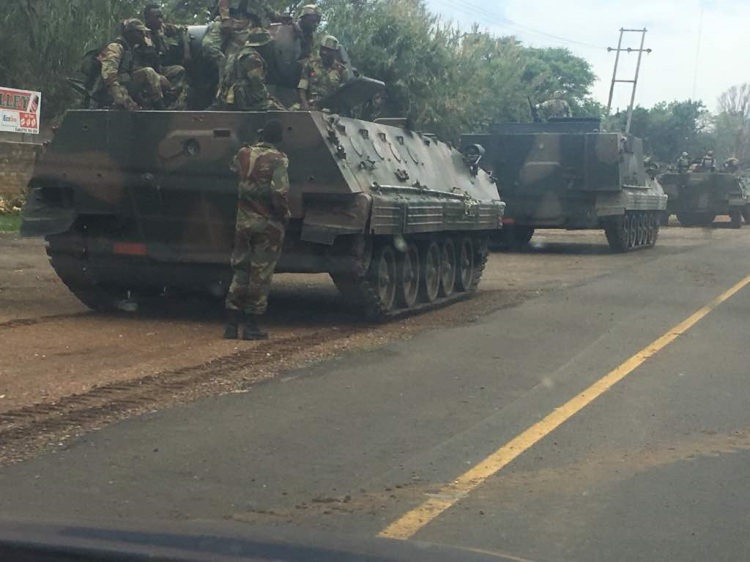 Mr Mnangagwa, who enjoyed the backing of the military, fled the country and said he and his family had been threatened. Over 100 senior officials allegedly supporting him have been listed for disciplinary measures by a faction associated with Ms Mugabe.

On Monday, General Chiwenga warned that the military would not hesitate to step in to end purges against former liberation war fighters, including Mr Mnangagwa, who is known as the “crocodile” because of his perceived shrewdness. 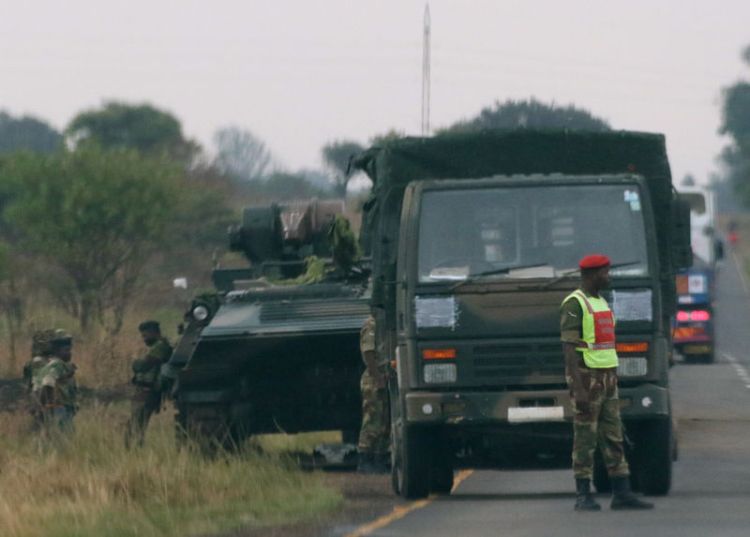 “We must remind those behind the current treacherous shenanigans that, when it comes to matters of protecting our revolution, the military will not hesitate to step in,” said General Chiwenga in a statement.

“The current purging … targeting members of the party with a liberation background must stop forthwith.”

The commander of Zimbabwe Defence Forces, and political ally of Mr Mnangagwa, added that the ZANU-PF had been hijacked by people who did not fight in the 1970s conflict, which some commentators read as a criticism of Ms Mugabe: a vocal critic of the former Vice President. 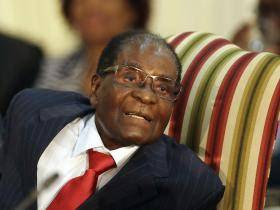 In response to the General’s words, ZANU-PF issued a statement accusing the commander of “treasonable conduct”, saying his comments were “clearly calculated to disturb national peace and stability” and were “meant to incite insurrection”. It was not clear whether the commander still had his post. 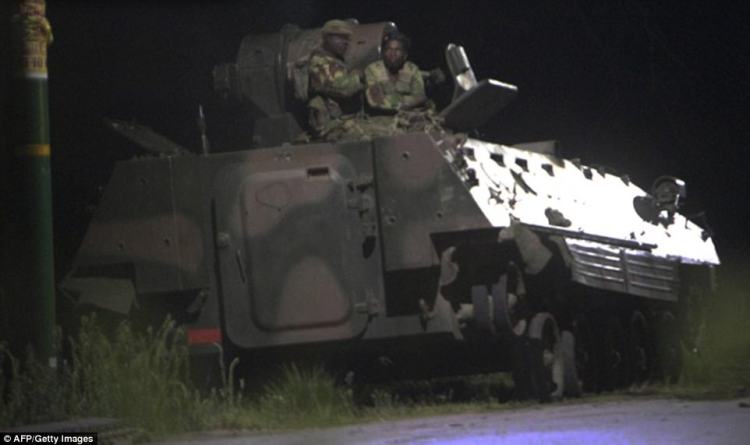 The Zimbabwe Broadcasting Corporation was this morning playing patriotic anthems from the time of the war against white rule, the struggle – “Chimurenga” – from which Robert Mugabe, originally guerrilla leader, emerged to become leader of his nation. The music was interrupted from time to time to broadcast a statement saying that the military was in charge and President Mugabe was safe.

Mnangagwa, who was also the intelligence chief, was sacked by Mugabe last week at the behest, it is widely believed, of his wife Grace, 41 years younger than her 93-year-old husband, who had declared that the “Crocodile” has turned into “a snake which must be hit on the head”. After receiving death threats, Mnangagwa fled to South Africa. Grace Mugabe was expected to be appointed his successor next month. 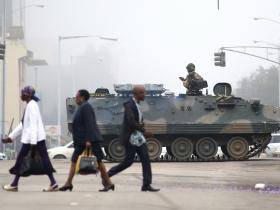 The announcement of the military takeover came from General Sibusiso Moyo, an aide to defence chief General Constantino Chiwenga, who is believed to have been in contact with Mnangagwa and who had declared 24 hours earlier that his forces were prepared to step in to end the purges within the ruling Zanu-PF party which had seen the departure of the Vice President.. 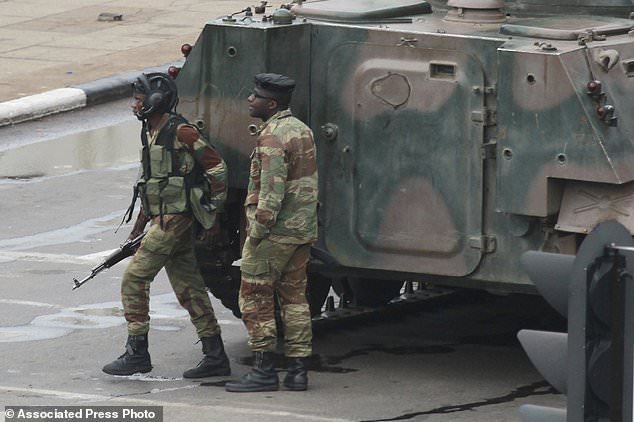 The real news, emerging slowly, was of the apparent removal of one of Africa’s longest serving heads of state and a figure of huge controversy in a coup, as well as the fortunes of the man known as “the Crocodile” and the woman regarded by her many enemies as the country’s Lady Macbeth – former Vice President Emmerson Mnangagwa and the President’s wife Grace. 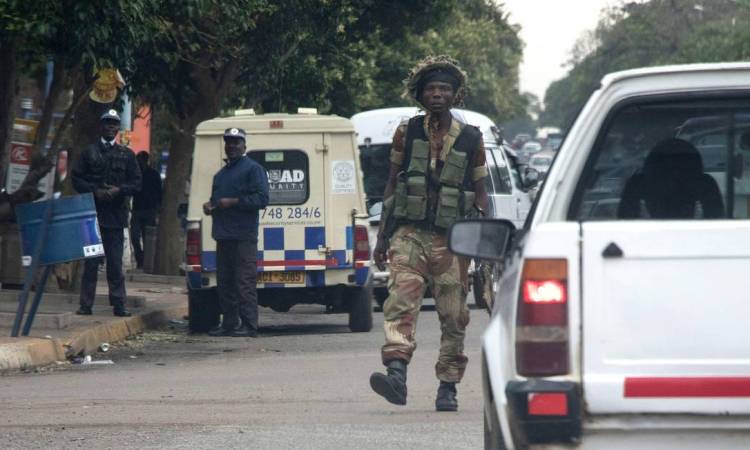 A Twitter account purporting to belong to the party (although there is now some confusion about whether or not it is in fact a parody account) said this morning that it will “present the views of Comrade Mnangagwa and will report to EM, henceforth consider this official, it is not controlled by a faction”. It later announced that Mnangagwa has been appointed interim president and there were further, unconfirmed, reports that President Mugabe was prepared to step down. 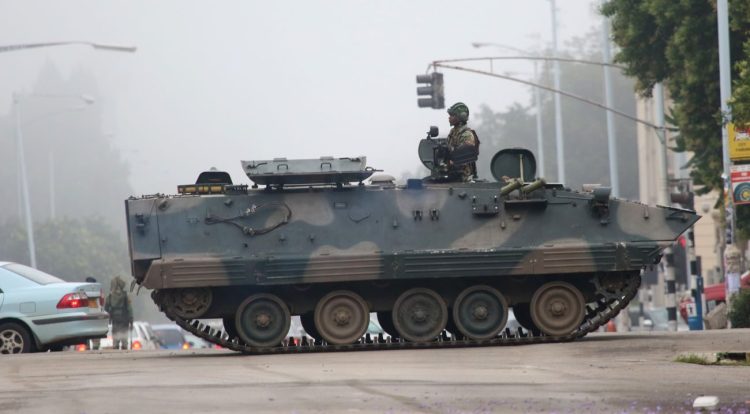 There has been no immediate news about the whereabouts of Grace Mugabe, but it is believed that she is being held alongside her husband. Among those reported to be arrested were Kudzai Chipanga, president of the Zanu-PF Youth League, who were fervent supporters of the President’s wife. Chipanga had declared that party’s young members would “fight and die” if the army attempted to seize power 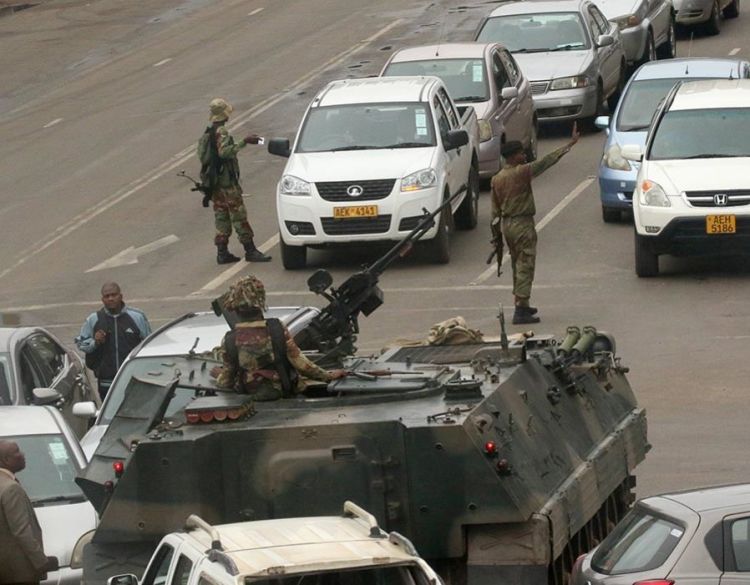