Putin warns of financial crisis the world ‘has not yet seen’

The global economy is facing a threat of a spiraling protectionist measures that can lead to a devastating crisis, Vladimir Putin warned. Nations must find a way to prevent this and establish rules on how the economy should work.

The Russian president spoke out against the growing trend of using unilateral restrictions to achieve economic advantage, as he addressed guests of the St. Petersburg International Economic Forum (SPIEF) on Friday.

“The system of multilateral cooperation, which took years to build, is no longer allowed to evolve. It is being broken in a very crude way. Breaking the rules is becoming the new rule,”he said. 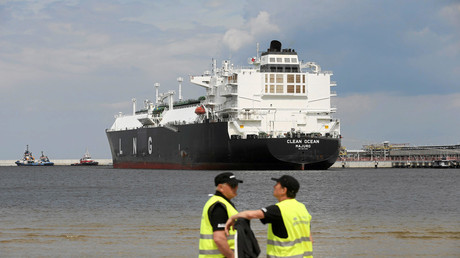 In addition to traditional forms of protectionism such as trade tariffs, technical standards and subsidies, nations are increasingly using new ways to undermine their competition, like unilateral economic sanctions. And nations which thought they would never be targeted by such measures for political reasons are now being proved wrong, Putin said.

“The ability to impose sanctions arbitrarily and with no control fosters a temptation to use such restrictive tools again and again, right and left, in every case, regardless of political loyalty, talks about solidarity, past agreements and long cooperation,” he said.

Putin called for a change of course, for free trade to be defended, and for rules-based regulation of the global economy, which would alleviate the chaos resulting from the rapid technological transformations arising from the development of digital technology.

“The disregard for existing norms and a loss of trust may combine with the unpredictability and turbulence of the colossal change. These factors may lead to a systemic crisis, which the world has not seen yet,” he said.

He stressed that there is a need for transparent universal rules as well as an inclusive mechanism, which would allow those rules to be amended in a way that would be accepted by the international community.

“We don’t need trade wars today or even temporary trade ceasefires. We need a comprehensive trade peace,” the president stressed.

“Competition, clash of interests, has always been, is, and will always be, of course. But we must be respectful towards each other. The ability to resolve differences through honest competition rather than by restricting competition is the source of progress,” Putin added.

The speech comes amid turbulent times for the global economy, in which the nationalist policies of US President Donald Trump have pitted America against other nations which his administration believes to be enjoying unfair advantages in trade. Trump has threatened China, European nations, Canada, and Mexico with trade restrictions, demanding the perceived misbalances be fixed.

The US has also intensified its use of economic sanctions, targeting Russia, Iran, North Korea, and other nations with various punitive measures.