PRESSURE was last night mounting on the EU to sign a free-trade agreement with Britain after a report revealed that a “no deal” scenario could cost the bloc more than £500 billion.

The shock figure emerged as Brussels looked set to cave in on a key demand to move a financial body out of the City of London and the head of Deutsche Bank was forced to admit a threatened “Brexodus” from the capital had been exaggerated.

The pro-Brexit Economists for Free Trade group forecast that Britain will gain £651billion from walking away from talks, leaving the EU with a £507billion bill.

Sir Patrick Minford, an economic adviser to the Treasury under Margaret Thatcher, used a classic trade model to predict that GDP will spike by nine per cent, amounting to a one-off gain of £180billion, if we leave on March 29, 2019, without a deal.

He predicts that the UK would make an additional £433billion in tariffs imposed on EU producers if we operated under World Trade Organisation rules, because we import more than we export.

That, plus the £38billion we have saved by not paying for the two-year transition period, adds up to a total of £651billion. 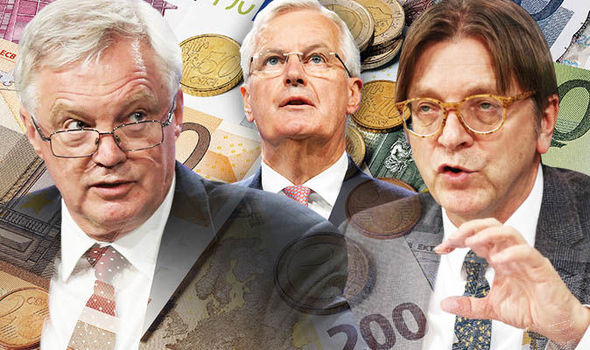 The cost to the EU would be the loss of the £38billion “divorce” payment, plus £433billion in tariffs, plus its balance of trade surplus with the UK estimated to be worth around £36billion – a total of £507billion.

Professor Minford said: “It could not be more open and shut who least wants a breakdown of negotiations.

Deutsche Bank chief executive John Cryan yesterday admitted it will move hundreds of jobs from the UK, rather than thousands, because of Brexit.

He added: “The number of 4,000 mentioned again and again in media reports is way too high.” 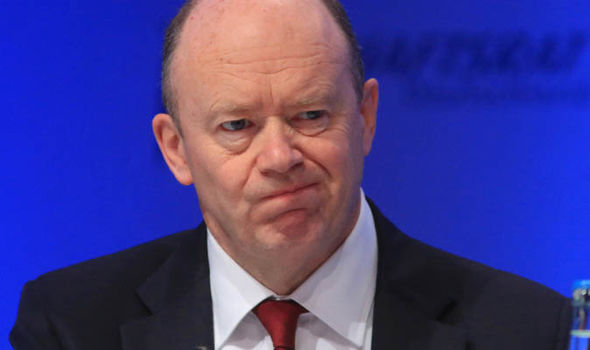 Deutsche Bank will move hundreds of jobs from the UK, rather than thousands, because of Brexit

He said Deutsche’s bankers, technology experts and traders would largely remain in London while the bank’s booking centre would move to Frankfurt.

“But this affects fewer jobs than many people think.”

The Sunday Express can also reveal that the European Parliament aims to soften plans to give EU regulators the power to force London’s main clearing house to move.

Euro clearing will be a major battleground between London and Brussels in phase two of the talks that will shape how Europe’s financial market is divided up after Brexit.

The EU Commission had proposed to give itself the power, along with the European Central Bank, to decide the future of clearing houses.

But Danuta Hubner, chairwoman of the constitutional affairs committee of the EU legislature, said: “We don’t want to give those bodies this right to use total discretion in deciding what is cleared where.”

It paves the way for the London Stock Exchange to remain an “authorised” clearing centre.

Chancellor Philip Hammond, who has emerged as a surprise weapon in the Brexit talks thanks to his close relationship with key German ministers, yesterday signalled Britain will not accept a trade deal that does not include services.

Writing in German newspaper Welt am Sonntag, he said: “More than 80 per cent of our economy is services. Services is the fastest growing area of global trade and it is the area where we have our biggest comparative advantage.”

EU negotiator Michel Barnier has said “there is no place” for financial services in the deal although EU member states including Italy, Spain, Hungary, Poland, Ireland and the Netherlands have all independently called for a “comprehensive” free trade deal to be struck with minimum tariffs. 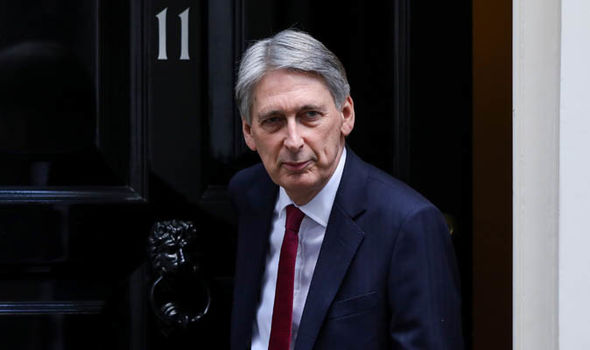 Theresa May will chair a Cabinet meeting on Tuesday to discuss Britain’s preferred outcome.

Leavers including David Davis, Boris Johnson, Michael Gove and Liam Fox, are thought to be winning the argument for divergence from the EU rather than the close alignment advocated by the likes of Mr Hammond and fellow Remainer Amber Rudd.

An impeccably placed source at the Department for Exiting the European Union said Mr Davis was emboldened by Mrs May’s hardened stance on Brexit.

“The Prime Minister certainly isn’t behaving like a Remainer. She is very optimistic about Britain’s future outside the EU. She is aiming very high when it comes to the talks and resolutely sticking to the mantra that no deal is better than a bad deal.”

The source added: “DD is in bullish mood. He thinks no deal is a much greater risk to the EU than a deal. If Britain walks away and still thrives, then the EU will be in big trouble.” 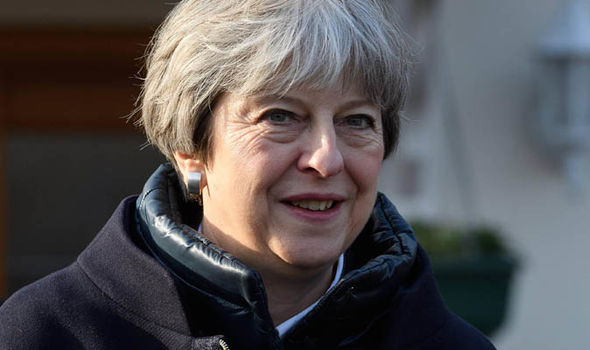 Former Tory leader Iain Duncan Smith said Britain had “nothing to fear” from trading with the EU on WTO rules provided businesses were given a full year to prepare.

“A global deal on WTO terms would be much better than a bad deal with the EU,” he said.

Leading Brexiteer Jacob Rees-Mogg agreed, saying: “We have nothing to fear from ‘no deal’ but the EU would be desperate both for our cash and trade.”

The Tory MP for North East Somerset added: “Professor Minford shows what a risk the EU would take by not giving us a deal, which is a timely reminder of our negotiating strength.”

MPs will now have to debate leaving the EU without a deal after a petition calling for us to walk away garnered 132,000 signatures, over the 100,000 threshold to prompt a parliamentary debate.