The Dutch military has experienced an embarrassing wardrobe malfunction, realizing too late that the soldiers might need warm underwear for upcoming NATO drills in Norway. The troops now will have to go shopping themselves.
.
.

The defense ministry failed to procure winter clothes for its soldiers ahead of the Trident Juncture 18 exercise in Norway. Around 1,000 Dutch soldiers, set to take part in the drills, will have to go shopping on their own, defense chief Barbara Vesser acknowledged on Tuesday. 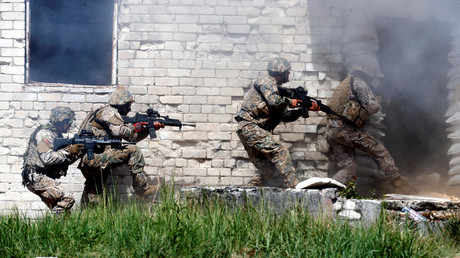 Vesser said there was no lack of uniforms and the soldiers only have to purchase warm underwear on their own. It seems, however, that the ministry is really concerned about the quality of the underpants, as each trooper will receive €1,000 (US$1,167) to go shopping.

Dutch lawmakers were outraged by the revelation, blasting it as “super embarrassing” and a “bizarre state of affairs.” Some criticized the minister’s way of handling the underwear crisis, expressing doubt whether the soldiers will be able to buy the right clothes on their own.

“Safety is primarily the responsibility of the employer. How does the State Secretary know that the soldiers will buy the right clothes?”Dutch MP Andreas Bosman said, as quoted by the NL Times newspaper.

The defense ministry blamed a “lack of time” for the shortage, adding that sending soldiers shopping was an “emergency” measure which will not be repeated.

Given the experiences of the Dutch NATO troops in Lithuania, warm underpants were apparently deemed unnecessary, and the weather conditions in Norway were disregarded. When the top brass finally realized that the troops will likely have to operate in well below zero temperatures, it was too late for the military suppliers to procure the necessary amount of clothing in time.

It remains unclear why the Dutch military “lacked time” to find the obvious, since Oslo agreed to host the drills back in early 2015. Trident Juncture 2018 will be held October-November in central and eastern Norway, as well as the North and Baltic Seas.

READ MORE: For ‘times of crisis and war’? Norway confirms US to double troops on its soil

The exercise is expected to involve around 40,000 participants from various NATO countries, 10,000 vehicles, 70 sea vessels, and 130 aircraft. The event is set to be the largest war games held by the alliance since 2002, and the largest Norway has hosted since 1980s.