To be honest, talking about it was a nightmare for her.

Theresa May’s keynote speech at the Conservative Party Conference was a disaster from beginning to end – not just because of the stunt by ‘Lee Nelson’ performer Simon Brodkin, not because of her extended coughing fit, in which she choked on her own words, not even because, it seems, arcane forces contrived to knock an ‘F’ off the slogan on the backdrop behind her (“F off”? It’s a headline-writer’s dream).

It’s an F off to the country from Conservative Party Conference….

The F has just fallen off so it now reads OR EVERYONE. 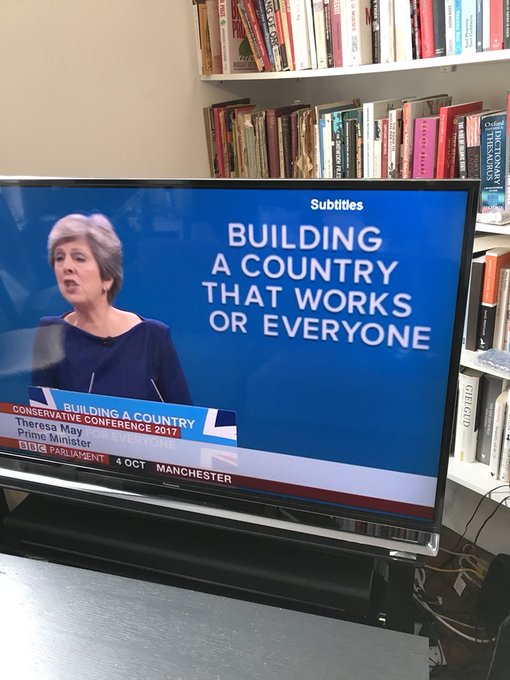 It was a disaster because it was rubbish.

This Writer thought it might be worth examining just the start of the speech, to demonstrate what I mean.

She started by telling us her life story. Nobody cared. We didn’t care that she thought the Tories under Margaret Thatcher were the party with all the ideas. Neoliberalism is dying a slow death, determined to take as many of us with it as possible. We didn’t care that she said the Thatcher project required hard work and discipline – Tory MPs come from a societal stratum that doesn’t understand the meaning of hard work, and as for discipline, count how often they stab their leaders in the back.

Nobody cared about her platitude about a Tory promise that each new generation should be able to build a better future. If that was the promise, then it was broken before Margaret Thatcher ever stood on the steps of Number 10. She planned the impoverishment of every working person in the UK and people like Theresa May have seen that project through, almost to its successful conclusion.

So when she said that dream was what she believes in, nobody cared. In fact, it was a turn-off.

She correctly identified the reason: “40 years later, for too many people in our country, that dream feels distant, our party’s ability to deliver it is in question, and the British Dream that has inspired generations of Britons feels increasingly out of reach.”

After 40 years, the Tories had failed to deliver on its promise. In fact, they have deliberately worsened conditions for the vast majority of the population. That should have been the moment she announced her resignation, called a general election, and left the stage.

And what’s all this nonsense about a “British dream”? She repeated the phrase more than 20 times during this benighted speech, as though it meant something. It didn’t. She was simply trying to copy the success of the “American dream” as an idea in the US. But recycled ideas, bought off-the-shelf, don’t work. We all knew what she was doing and we weren’t having any of it.

What even is ‘The British Dream’ ?

At least she apologised for calling a ‘vanity’ election and running a lousy campaign.

She continued: “The choice before us now is clear. Do we give up, spend our time looking back?”

Yes. Conservatives are a backward-looking organisation that has nowhere left to go.

“Or do we do our duty, look to the future and give the country the government it needs?”

Yes – by throwing in the towel and letting Labour take over.

This country will judge us harshly if we get this decision wrong.

“Because all that should ever drive us is the duty we have to Britain and the historic mission of this party – this Conservative Party – to renew the British Dream in each new generation.”

A “historic” mission to renew an idea symbolised in a phrase that Mrs May had literally just mentioned? Give us a break.

“The dream that, for decades, has inspired people from around the world to come to Britain. To make their home in Britain. To build their lives in Britain.”

And then to be accused of being illegal immigrants after somebody saw Mrs May’s racist “go home” vans a few years ago, perhaps?

So far, her speech had been easily-dispelled waffle. Apparently the next section was subtitled “The good a Conservative government can do.” Let’s look at her claims.

“Seven years ago, our challenge was to repair the damage of Labour’s great recession – and we did it.”

Whose “great recession”? It has now been firmly established that the recession was caused by an international banking crisis and had very little to do with the Labour government that was well on the way to re-balancing our finances when the Tories turned up, hand in hand with the Liberal Democrats, and flushed us all down the toilet.

“The deficit is down.”

But the Tories promised to eliminate it by 2015 – two years ago.

“Spending is under control.”

But the Tories have announced £15 billion of unfunded spending since the election.

“And our economy is growing again.”

“An income tax cut for over 30 million people.”

A huge mistake when you’re trying to pay off a deficit. Better to increase wages and therefore ability to pay tax.

“Four million taken out of paying it at all.”

A sign of failure. They don’t earn enough. What happened to the promise that each generation would do better than the last?

“Employment up to a record high.”

On zero-hour contracts. If everyone worked just one hour a year, the Tories would claim full employment (not my line).

“Unemployment down to a historic low.”

Because so many jobseekers have been sanctioned – some of them into the grave.

“Income inequality at its lowest for thirty years.”

The most doubtful statistic This Writer has seen in nearly a quarter of a century as a news reporter.

“More women in work than ever before.”

Forced there to make ends meet for their families, or because they cannot afford to retire.

All of whom started training under Labour.

And nobody taking up new training places because the Tories have poisoned nursing as a career.

Have the Tories lowered standards, then?

How many full-time jobs at the end of them?

“Crime down by more than a third.”

Is that reported crime? Recorded crime? Or actual crime?

“More young people from disadvantaged backgrounds going to university than at any time in the history of our country.”

And getting hugely into debt.

By importing it all here?

“and countering terrorism wherever it rears its head.”

A sick joke. Five successful terror attacks in the UK this year – and this year isn’t over. Mrs May herself ordered the cuts that made the police less able to investigate and prevent terrorism.

“Same sex marriage on the statute book, so that two people who love each other can get married, no matter what their gender.”

This was a certainty in any case. A Labour government would have brought it in if the Tories had not.

“And a National Living Wage – giving a pay rise to the lowest earners – introduced not by the Labour Party, but by us, the Conservative Party.”

A living wage would pay enough for a person/family to be able to provide for themselves without relying on any benefits at all. The Tory living wage does not allow this and is, therefore, a lie.

“Never allow the Left to say they have a monopoly on compassion.”

“Never allow the Left to say they have a monopoly on compassion” – Theresa May. “Clear away the bodies” and make a profit – Boris Johnson.

Next, Mrs May moved on to a particularly cringeworthy passage in which she tried to claim that Tories fight injustice. At the end of every anecdotal example she mentioned, she said, “That’s what I’m in this for.”

No. She’s in this for power and money. We all know this because, despite calling an election to satisfy her own vanity and losing her Parliamentary majority, Mrs May did not do the decent thing – she clung on, first by lying to the Queen about having done a deal with the DUP, then by doing a deal with them, then by rigging the composition of Parliamentary committees to give the Tories a majority they do not deserve. She is continuing as prime minister because she wants power for its own sake.

Let’s move on to the reactions before I lose the will to live.

The following are trawled from Twitter and have been chosen because they are either relevant or gave me a giggle. Enjoy