Britain is Broken… We can’t afford the Tories

Well, that’s what Theresa May claimed during her speech at the Tory party conference this Wednesday. Just the day before Chancellor Philip Hammond made it clear that austerity is set to continue…. So, which one do we believe? This is another clear sign of the weakness and chaos sweeping through the Conservative party at the moment. We can shed some needed light on the case, Austerity isn’t over. In fact it is getting worse and it’s about to get much worse.

Theresa May also stated that the years of hard work (austerity) has paid off. But paid off for who? We are witnessing the longest decline in real wages since the Victorian era, A&E waiting times were there worst ever this winter, unmet demand for homes now reaching almost 4 million, 116,000 households officially designated homeless across the country in 2016/17, biggest overall shortage of teachers ever recorded. Unfortunately, this is only the tip of the ice-burg. All this while the richest 10% in society get even more rich.

Britain is Broken, We can’t afford the Tories: We are rolling out a National Campaign which will include a speaking tour throughout the country. We will launch on the 8 Nov in London. Look out for more details, tickets and tour dates. If you are interested in putting on a local event please contact us: office@thepeoplesassembly.org.uk

“Every year we have more work to do and get less and less for it. It has to stop now. We are making a stand for low paid workers, exploited workers, workers on precarious contracts who are being taken advantage off by unscrupulous employers.’ 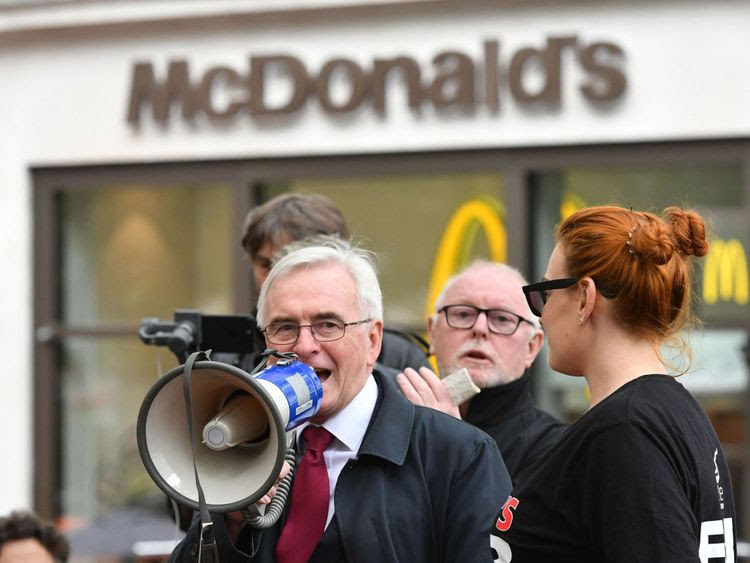 Shadow Chancellor, John McDonnell MP was also among the speakers. He said:

“Last night a briefing went out to all Labour MPs which basically said, if there is a picket line in your constituency, your responsibility is to join it. It made it absolutely clear that the Labour Party is 100% behind the strikes, the demonstrations, the actions that are being taken by workers themselves to achieve a decent pay rise and to achieve decent conditions at work.” he went on to say “We have 4 million children out there living in poverty. Two thirds of them from families were someone is out working. What does that say? It says that wages are so low that people cannot survive on poverty wages as we are experiencing in this Country. This Government has created an economy based on low pay and insecurity. Our Movement is saying enough is enough and we are now going to campaign to ensure that people are properly represented, properly paid and treated with respect once and for all”

We will keep you updated on the next steps of this campaign.

The People’s Assembly urgently needs to raise our monthly income in order to keep organising events and actions across the country. Please consider donating today.Thank you!

The People’s Assembly Against Austerity
http://www.thepeoplesassembly.org.uk/