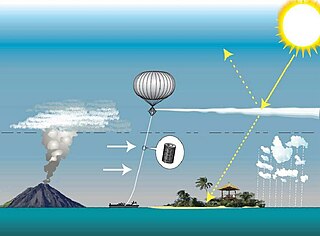 The ability of stratospheric sulfate aerosols to create a global dimming effect has made them a possible candidate for use in solar radiation management climate engineering projects to limit the effect and impact of climate change due to rising levels of greenhouse gases. Delivery of precursor sulfide gases such as sulfuric acid, hydrogen sulfide (H
2S) or sulfur dioxide (SO
2) by artillery, aircraft and balloons has been proposed.

It presently appears that this proposed method could counter most climatic changes, take effect rapidly, have very low direct implementation costs, and be reversible in its direct climatic effects.

One study calculated the impact of injecting sulfate particles, or aerosols, every one to four years into the stratosphere in amounts equal to those lofted by the volcanic eruption of Mount Pinatubo in 1991,[6] but did not address the many technical and political challenges involved in potential solar radiation management (SRM) efforts.[7] If found to be economically, environmentally and technologically viable, such injections could provide a “grace period” of up to 20 years before major cutbacks in greenhouse gas emissions would be required, the study concludes.

It has been suggested that the direct delivery of precursors could be achieved using sulfide gases such as dimethyl sulfide, sulfur dioxide (SO
2), carbonyl sulfide, or hydrogen sulfide (H
2S).[5] These compounds would be delivered using artillery, aircraft (such as the high-flying F-15C) or balloons, and result in the formation of compounds with the sulfate anion SO42−.[5]

According to estimates, “one kilogram of well placed sulfur in the stratosphere would roughly offset the warming effect of several hundred thousand kilograms of carbon dioxide.”