The Royal Navy has completed a five-day operation escorting Russian warships through the English Channel.

The RFS Admiral Kulakov destroyer is returning home from the Mediterranean with fellow warships from the Russian navy’s Northern Fleet.

Three Navy ships and two helicopters were involved in keeping a close watch on four Russian vessels as they made their way up the Channel and into the North Sea, the Navy confirmed on Monday afternoon.

Plymouth-based frigate HMS Sutherland led the Royal Navy effort to monitor the force – RFS Marshall Ustinov, a Slava-class missile cruiser, RFS Admiral Kulakov a Udaloy-class destroyer and their support vessels Sliva, an ocean-going tug and tanker Vyazma – as the group sailed up from the Bay of Biscay having completed a deployment to the eastern Mediterranean. 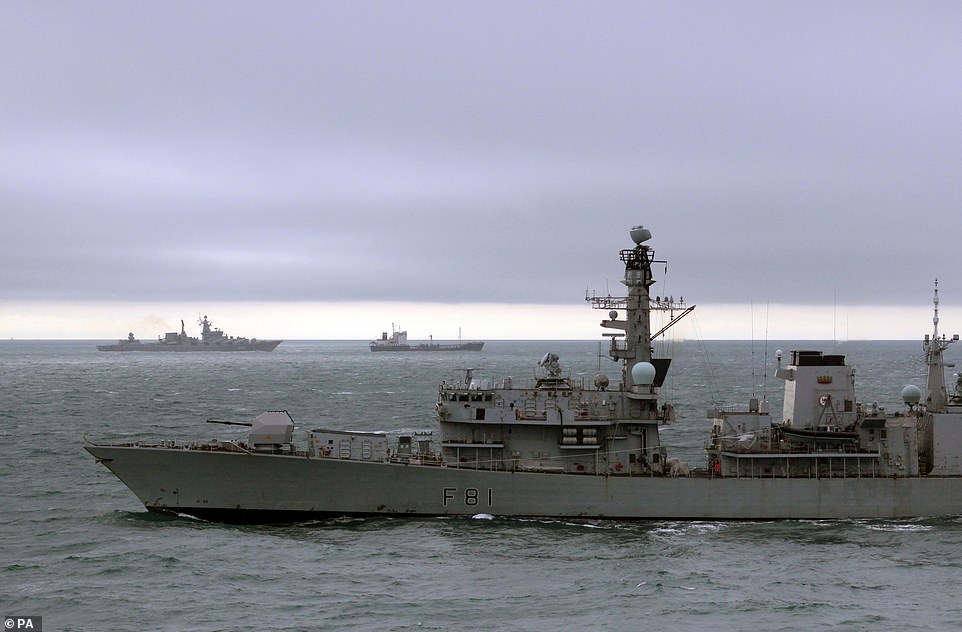 HMS Sutherland, pictured front, is monitoring four Russian vessels as they pass through the English Channel on their way back to base having been on patrol in the Mediterranean. The vessels included the the Missile Cruiser Marshall Ustinov, top left, which was sailing astern of the tanker Vyazma, top centre 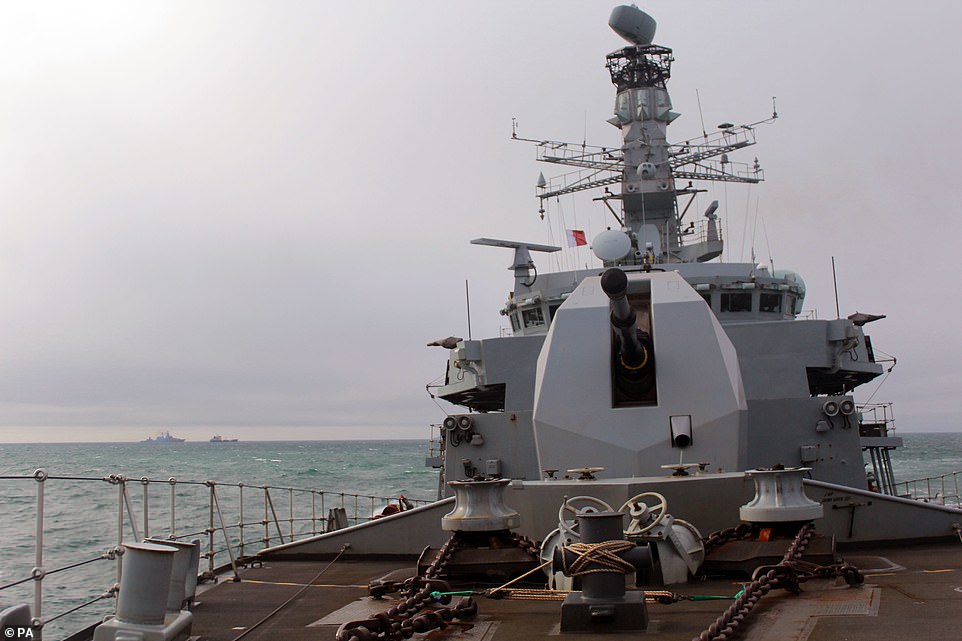 Sutherland, a Type 23 Frigate, was among three Royal Navy vessels and two helicopters to track the Russian navy as the passed into the North Sea 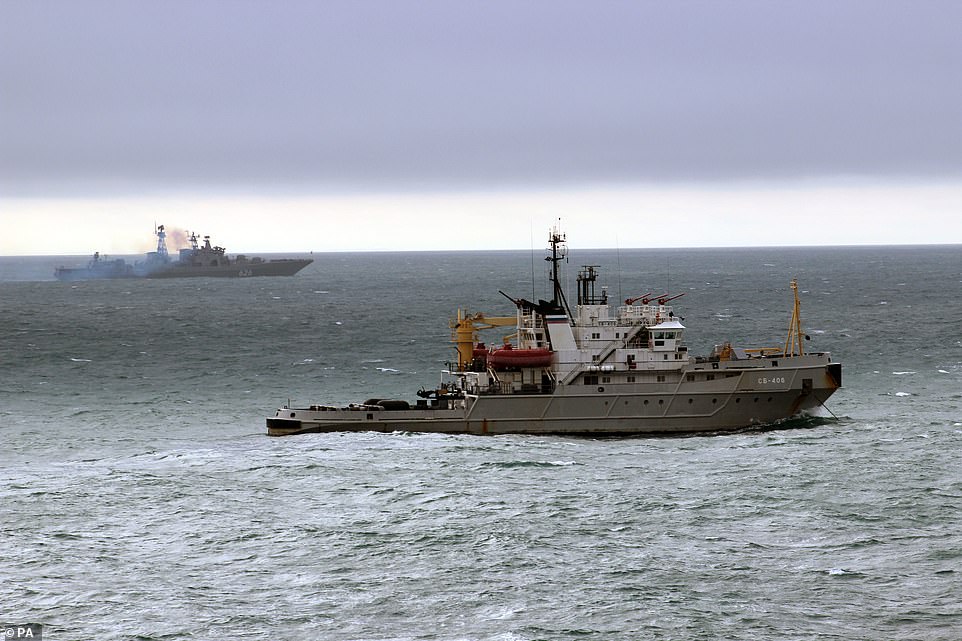 Two other vessels, Vice Admiral Kulako, top left, and the tug Sliva, were also in the English Channel this morning

‘As the UK’s high-readiness frigate we conduct security patrols in and around our territorial waters and national infrastructure,’ said Commander Tom Weaver, Commanding Officer of HMS Sutherland which is currently the Navy’s on-call vessel to respond to incidents in home waters.

‘Working with our French and Norwegian allies, these units were monitored on their transit north from the Mediterranean and our interaction with them was wholly professional.’

‘Our ship’s company remain determined to uphold the integrity of our sea lanes and will maintain a vigilant watch. It’s vitally important the Royal Navy continues to demonstrate its presence and commitment to the integrity of our territorial waters and this tasking is a clear example of that.’ 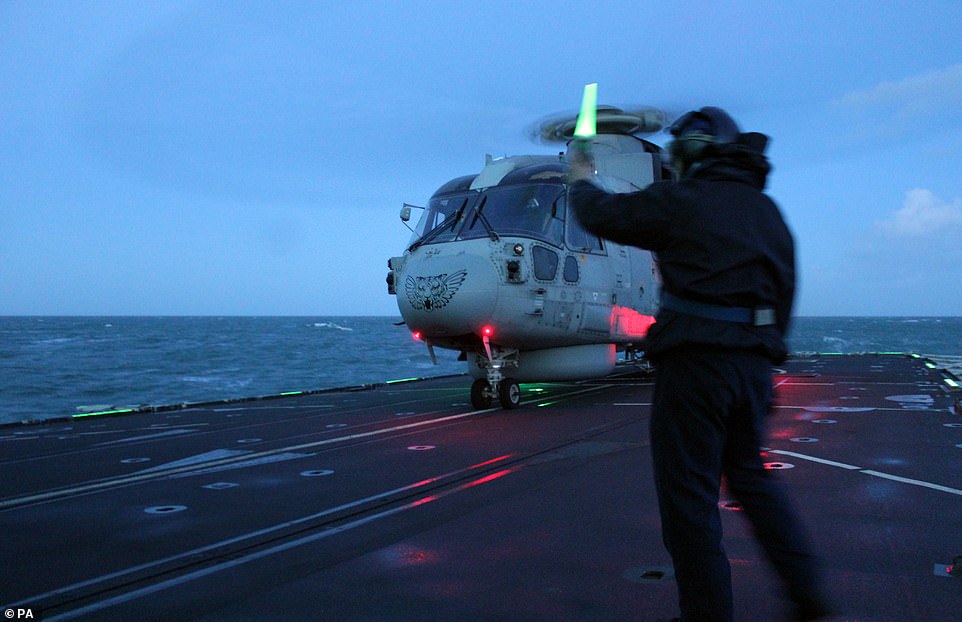 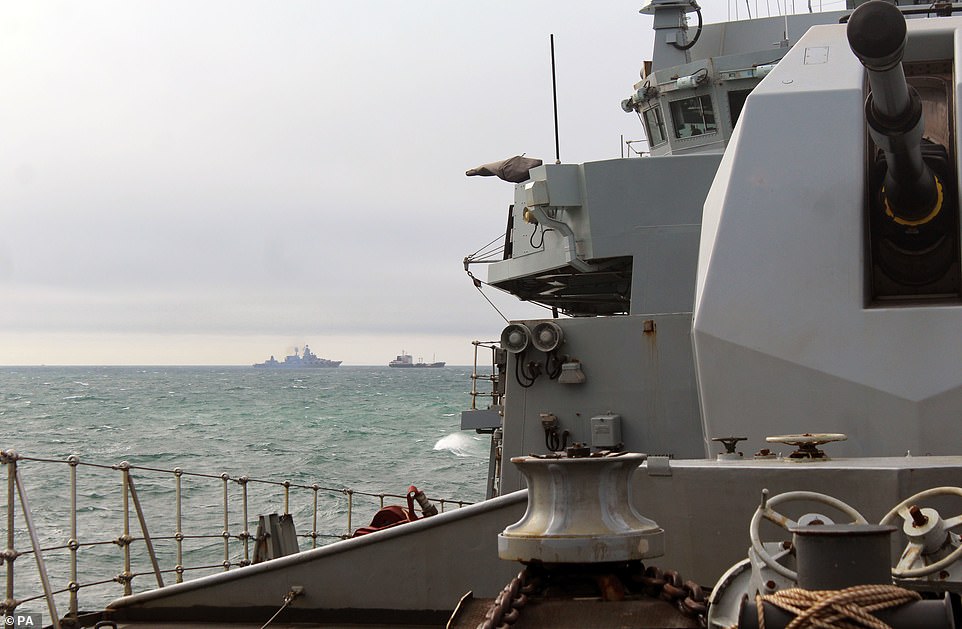 The Admiral Kulakov and Marshal Ustinov are no strangers to British waters, having been shadowed by Royal Navy warships on previous occasions.

In August 2019 HMS Medway followed the progress of the Marshal Ustinov as she sailed from the North Sea, past Dover and into the Channel.

The then-brand-new Royal Navy patrol ship was dispatched from Portsmouth and spent 36 hours monitoring the Russian vessel before handing over to French naval forces.

Somerset, a Plymouth-based Type 23 frigate, detected and monitored the movements of the Admiral Kulakov and her supporting tanker and escorted them through UK waters and along the coast of Norway.

In March 2016 the Admiral Kulakov passed through the English Channel and up the east coast of the UK as it returned from a deployment to Syria.

HMS Somerset, along with her Merlin helicopter, was used to detect and monitor the movement of the Russian warship and escorted it through UK waters.

The Admiral Kulakov also visited British waters in 2013 under different circumstances, taking part in a commemoration of the 70th anniversary of the Battle of the Atlantic.