In a first, the USS Portland took down a target drone with a new solid state laser this week, the first step in the Navy’s quest to get the powerful weapon on more ships in the future. 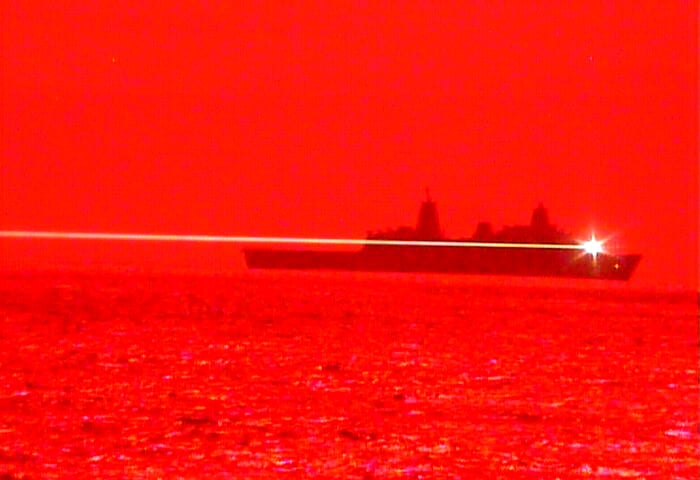 USS Portland (LPD 27) fires a Solid State Laser in the Pacific on May 16.

WASHINGTON: In a first, the USS Portland took down a target drone with a new solid state laser this week, the first step in the Navy’s quest to get the powerful weapon on more ships in the future.

The shot from the San Antonio-class landing platform ship tested out what’s known as the Technology Maturation Laser Weapon System Demonstrator, or LWSD, which has been aboard the ship for several months. The May 16 test, announced by the Pacific Fleet today, is the first public acknowledgement of the system being put to use.

The Northrop Grumman-made LWSD is a high-energy laser weapon initially developed by the Office of Naval Research, and its operational employment marks “the first system-level implementation of a high-energy class solid-state laser,” according to a Pacific Fleet release.

The test comes as the US, in bits and pieces, ramps up operations in the Pacific as a counterweight to China — moves which include new, ambitious B-1 bomber flights close to Russian and Chinese territory.

Just this week, the USS Ronald Reagan and Theodore Roosevelt carriers went back to sea from bases in Japan and Guam, respectively, while the USS Nimitz is getting its air wing up to speed off the coast of Washington state.

And earlier this month, two Navy ships sailed into the middle of an ongoing dispute between China and a neighbor in the South China Sea — steaming near a shadowing Chinese warship in Washington’s latest effort to show presence in an increasingly contested waterway.

The Littoral Combat Ship USS Montgomery and supply ship USNS Cesar Chavez sailed close to a Malaysian drillship, the West Capella, warning off Chinese warships who spent weeks harassing the commercial vessel in international waters illegally claimed by Beijing. Since the passthrough, both the Chinese and Malasyian ships have moved away from one another.

On April 30, a day after Bunker Hill’s transit, two B-1 bombers flew over the South China Sea.

The laser test was much quieter, but no less significant in the long run.

“By conducting advanced at sea tests against UAVs and small crafts, we will gain valuable information on the capabilities of the Solid State Laser Weapons System Demonstrator against potential threats,” said Capt. Karrey Sanders, commanding officer of Portland.

The LWSD is thought to pack about 150kw worth of power, a step up from the smaller, 50kw laser that was tested on the USS Ponce starting in 2014.

Breaking Defense In your inbox