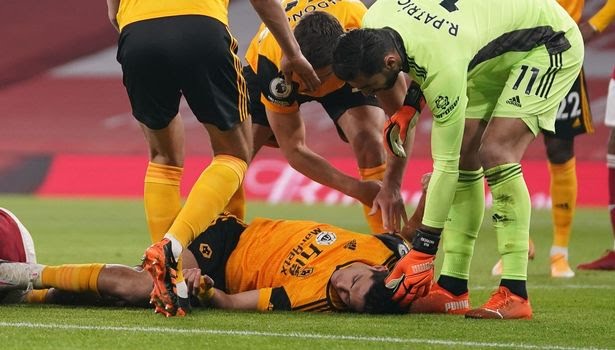 RAUL JIMENEZ is in a “comfortable” condition following his sickening clash of heads with David Luiz last night.

Wolves have released a statement this morning giving an update on his condition – and the news is positive.

The match was forced to be stopped for 10 minutes while he received medical care.

Follow ALL of the latest updates below…Brain injury association Headway expressed anger and disappointment at football’s continued failings to protect players from concussion after Raul Jimenez fractured his skull against Arsenal in a collision with David Luiz – who played on until half-time.Luke Griggs, deputy chief executive at Headway, said: “Only last week we strongly criticised the International Football Association Board (IFAB) for its continued procrastination in introducing concussion substitutes into the sport.“Too often in football, we see players returning to the pitch having undergone a concussion assessment – only to be withdrawn a few minutes later when it is clear that they are not fit to continue.“That is the very reason why we urgently need temporary concussion substitutes in football. You simply cannot take a risk with head injuries. They are not like muscular injuries where you can put a player back on ‘to see if they can it if off’. One further blow to the head when concussed could have serious consequences.“The question that has to be asked is had the concussion substitutes rule been in place, would Luiz have been allowed to return to the field of play? Would that extra time in the treatment room have led to a different decision being made?“The concussion protocol clearly states that ‘…anyone with a suspected concussion must be immediately removed from play’, while the sport continues to promote an ‘if in doubt, sit it out’ approach to head injuries.“Time and time again we are seeing this rhetoric not being borne out by actions on the pitch. Something is not right. This cannot be allowed to continue. How many warnings does football need?”

TODAY, 09:16FRACTURED SKULLRaul Jimenez has had surgery after fracturing his skull in a horrific clash of heads with Arsenal’s David Luiz.The Wolves striker was rushed to hospital by an air ambulance car after the sickening collision during last night’s Premier League win over Arsenal.The 29-year-old regained consciousness having been knocked out cold by the initial impact – but scans revealed a fracture which specialists decided needed an operation to repair.A Wolves statement said: “Raul is comfortable following an operation last night, which he underwent in a London hospital.

Wolves striker Raul Jimenez has had surgery on a fractured skull suffered in a clash of heads during his side’s Premier League win at Arsenal.

Sunday’s match at Emirates Stadium was in its early stages when Jimenez and Gunners defender David Luiz accidently collided at an Arsenal corner.

He was given oxygen on the pitch before being taken to hospital.

“Raul is comfortable following an operation last night,” Wolves said in a statement.

“He has since seen his partner Daniela and is now resting. He will remain under observation for a few days while he begins his recovery.

“The club would like to thank the medical staff at Arsenal, the NHS paramedics, hospital staff and surgeons who, through their skill and early response, were of such help.”

The game was stopped for around 10 minutes to allow Jimenez, 29, to receive treatment before he was carried off the pitch on a stretcher.

“It was a bad moment. What was the reaction? Panic, panic panic. You could see the faces on the team-mates. It was a serious situation. It’s awful and terrible.”

Nuno’s Arsenal counterpart Mikel Arteta said he knew “something really bad is happening” from the reaction of the players.

Brazil centre-back Luiz, 33, played on with a bandage wrapped around his head before being substituted at half-time.

Speaking on Match of the Day 2 about the decision to allow Luiz to continue playing, former England striker Alan Shearer said: “Football needs to get real and wake up. It needs to get serious, not next month, now. This has been going on for far too long. The [concussion] protocols in football are not acceptable.”

He had netted four times in nine top-flight appearances this term before Sunday’s match and signed a new four-year contract with the Molineux club in October.Video captionJimenez injury was serious – Nuno

‘It’s something you never want to see’ – what they said

Wolves captain Conor Coady: “We were massively worried when it happened. We knew straight away it was a horrible clash of heads.

“But we just hope and pray everything is OK because it’s something we never want to see.

“He is with the right people now and that’s the most important thing. He is in hospital and, by all accounts, he is awake and breathing.”

Arsenal manager Mikel Arteta: “I was shocked because I saw the reaction of the players – they were asking the doctors. We were really worried for Raul Jimenez because it was really nasty.”

Wolves forward Pedro Neto: “I was a little bit worried. I didn’t see the impact but I heard it. I hope he is OK and can recover to come back with us.”

Arsenal said protocols were followed regarding the decision to allow Luiz to play on after the incident.

However, the Brazilian was pictured with blood seeping from his head bandage and did not reappear for the start of the second half as he was was replaced by Rob Holding.

Footballers who sustain a suspected concussion, either during training or in a game, should immediately be removed from the pitch and not allowed to return until the appropriate treatment has been administered, according to FA guidelines.

Arteta said afterwards: “We followed the protocol to check he [Luiz] had not lost any consciousness, which he hadn’t, and then some tests.

“They will continue to do some more checks on him. He was really uncomfortable and couldn’t really head the ball and couldn’t continue.”

‘Football needs to wake up’

Shearer has previously presented a BBC documentary on dementia and is aware of the risks players face from head injuries.

“If David Luiz has passed all the protocols like Arsenal say he has, how on earth is he allowed back on to the pitch with a wound that is dripping down his face?

“We’re talking about players’ welfare here. Football’s protocols allow someone who has a cut that is seeping through a bandage that has just been put on to carry on playing and then he has to go off again 20 minutes later because he can’t head a ball.

“Cricket do it, the NFL does it, both codes of rugby do it – they all have better protocols. We’re talking about life and death and players’ careers ending.

“They’re on about trialling concussion substitutes. What is there to trial? It’s been going on for years. It’s not acceptable.