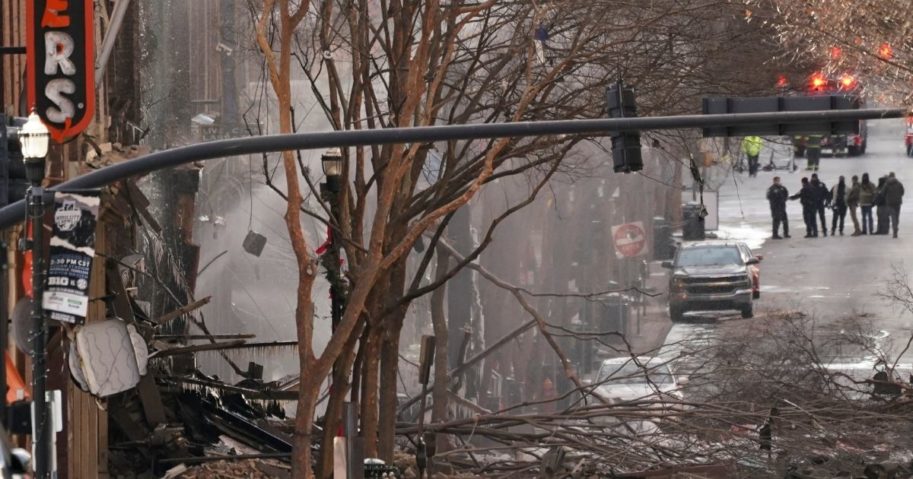 AP Photo/Mark HumphreyEmergency personnel work at the scene of an explosion in downtown Nashville, Tenn., Friday, Dec. 25, 2020. Buildings shook in the immediate area and beyond after a loud boom was heard early Christmas morning.(AP Photo/Mark Humphrey)By The Associated Press
Published December 25, 2020 at 7:03amShare

Authorities believe an explosion that rocked the downtown Nashville area early on Christmas Day was a deliberate act, according to Metro Nashville Police Department.

Police spokesman Don Aaron said the 6:30 a.m. explosion, which shattered glass and damaged buildings, was believed to be “an intentional act.”

Police earlier said they believe a vehicle was involved in the explosion. He said three people were taken to area hospitals for treatment, although none were in critical condition.

Police and fire crews were on the scene, as were investigators from the FBI and the Bureau of Alcohol, Tobacco, Firearms and Explosives.

“Right now, it’s a public safety concern, to make sure everybody is accounted for and to make sure the spread of the fire doesn’t go any further,” Michael Knight, a spokesman for the ATF in Nashville, told The Associated Press.

TRENDING: A Detroit Election Official Was Forced Into Hiding After Refusing To Certify Election Results

Black smoke and flames were seen early Friday billowing from the area, which is packed with bars, restaurants and other retail establishments and is known as the heart of downtown Nashville’s tourist scene.

Buildings shook in the immediate area and beyond after a loud boom was heard.