A total of 3,234,946 people across the UK have now had the first dose of a Covid vaccine and the number of positive tests announced today – 55,761 – was 18 per cent lower than last Friday. Daily deaths were also down slightly on last week, at 1,280.

Speaking about lockdown working even on the fast-spreading variant that emerged in Kent and now accounts for a majority of all cases in the UK, Professor Whitty said: ‘We were not sure this was going to be possible with this new variant, but this demonstrates with the actions everyone has taken we are now slowing this right down and we are hoping that in due course it will start to drop.’

Leading the optimistic Friday press conference, Boris Johnson praised the public’s efforts at following lockdown rules and appealed for people not to weaken, saying they must ‘think twice’ before leaving the house. ‘This is not the time for the slightest relaxation of our national resolve and our individual efforts,’ he said. ‘So please stay at home, please protect the NHS and save lives.’

Professor Whitty said that the NHS is still under ‘extraordinary’ pressure but he believed the peak of infections had already happened in much of the country and hospitalisations could top out in the next week to 10 days in most places.

‘The peak of deaths, I fear, is in the future,’ he said. ‘The peak of hospitalisations in some parts of the country may be around about now and beginning to come off the very, very top.’

‘Because people are sticking so well to the guidelines we do think the peaks are coming over the next week to 10 days for most places in terms of new people into hospital.’

Sir Patrick also sounded a positive note about the direction of travel, but added that the measures in place were the only thing holding the disease back: ‘Take the lid off now this is going to boil over for sure.’

The big policy announcement for the PM’s appearance was that, from Monday, all arrivals to the UK from abroad will have to test negative and isolate for 10 days when they get here, regardless of where they come from.

Amid fears over new mutant strains coming into the country, triggered by the discovery of a worrying variant from Brazil in travellers in Japan, he said that from 4am Monday all travel corridors will be suspended and anyone coming to the UK must have proof of a negative test in the previous 72 hours.

Even then people must still isolate for 10 days – or five if they have another negative result during that period.

The new regime will be backed by tougher spot checks and stay in place until at least February 15 as ministers and scientists work out how to manage the threat posed by mutations. It was revealed today that 11 people in Britain have been diagnosed with one of the variants that have sprung up in Brazil, although it is thought to be the milder of the two and it’s not clear how much of a threat it poses.

The Prime Minister is facing demands to take advantage of the space created by the tough restrictions to push ahead on vaccinations as figures showed the number of jabs being administered rocketing to 320,000 a day. Almost 3.7million doses have been given out. 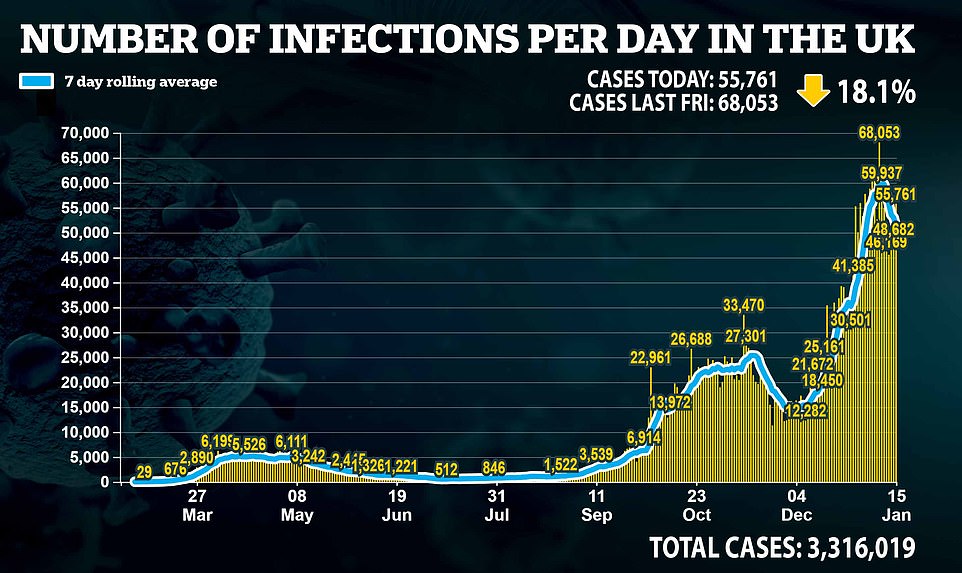