Ready for war! China flaunts footage of its troops taking part in live-fire training after President Xi ordered his two million soldiers to be prepared for combat ‘at all times’

China‘s state TV has shown off footage of Chinese troops taking part in live-fire military drills after President Xi Jinping ordered his soldiers to be ready for war ‘at all times’.

The country’s two million or so soldiers ‘jumped into action’ upon receiving their leader’s instruction to get themselves prepared for combat, reported China’s state media.

Xi urged members of the Chinese People’s Liberation of Army, the world’s largest army, ‘not to fear death’ in a mobilisation order signed by him on Monday.

Scroll down for video 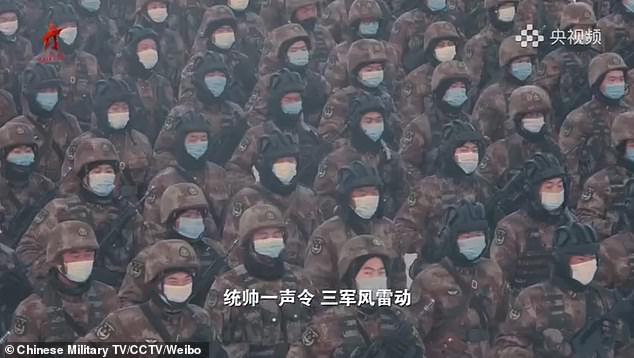 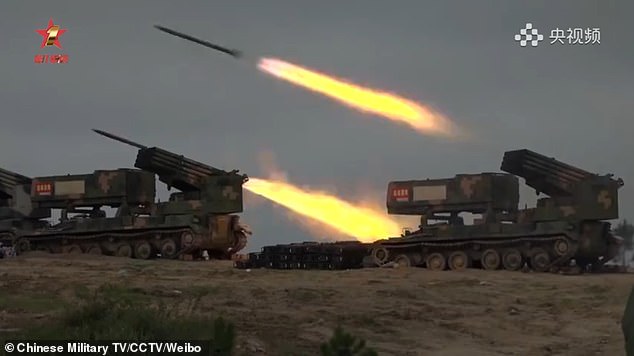 China’s President Xi Jinping urged his People’s Liberation of Army ‘not to fear death’ in a mobilisation order signed by him on January 4. In this file photo, Xi speaks after he reviewed the Chinese People’s Liberation Army Navy fleet in the South China Sea on April 12, 2018China flaunts footage of troops taking part in live-fire trainingLoaded: 0%Progress: 0%0:00PreviousPlaySkipMuteCurrent Time0:00/Duration Time0:59FullscreenNeed Text

Dramatic footage released by the country’s official TV channel shows mask-donning soldiers standing in formation as they receive the directive signed by their leader.

The Chinese land, air and naval forces engaged in training sessions ‘enthusiastically’ as soon as the order was issued, according to the video released by China Central Television through its social media account.

The minute-long clip shows armed soldiers running, jumping out of military aircraft and hunting for enemies in mock battles.

It also shows multiple warships sailing and opening fire, rows of military tanks initiating attacks and missiles being launched during intense exercises reported to take place across the country.

The Chinese land, air and naval forces engaged in training sessions ‘enthusiastically’ as soon as the order was issued, reported China Central Television through its social media account

On Monday, Xi commanded his troops to step up training in ‘real combat conditions’ to ensure their combat readiness and abilities to win battles, according to a script of his order released by Xinhua News Agency.

Xi is the head of the Chinese military. He serves as the general secretary of the Communist Party of China (CPC) Central Committee and chairman of the Central Military Commission (CMC).

In the first order from the CMC in 2021, Xi called on the People’s Liberation of Army (PLA) not to fear hardship or death.

He demanded all servicemen sharpen their fighting spirit and perfect their combat skills to welcome the 100th anniversary of the founding of the Communist Party of China this year.

Xi commanded his troops to step up training in ‘real combat conditions’ to ensure their combat readiness and abilities to win battles. Pictured, Chinese soldiers assemble during military training at Pamir Mountains in Kashgar, northwestern China’s Xinjiang region on January 4

Speaking to South China Morning Post, Hong Kong-based military commentator Song Zhongping said: ‘China is indeed facing a great risk of war, which has been seriously implied in this order.’ Chinese soldiers are seen taking part in military training in Kashgar on January 4

Military commanders must strengthen joint operations in combat and training for soldiers across different fields and services, Xi added.

Observers suggested that Xi’s latest order showed the leader’s intention to boost the PLA’s capability of winning a war at all cost.

Addressing the Central Military Commission in Beijing on November 25, the Chinese leader again stressed the importance and urgency of war preparations. Xi is quoted by state news agency Xinhua by saying that the key to winning wars is to strengthen training

Xi regularly uses feisty words in addresses to his armies to ensure that all soldiers are on standby for potential military conflicts.

In November, he also urged his troops not to fear death and to prepare to win warswhile addressing military commanders.

Xi has previously called for military readiness amid spiking political tensions between China and other countries, particularly the US and self-ruled Taiwan, over coronavirus pandemic, territorial disputes and human rights.Read more:

On 9th April 2021, you could become the owner of this fully furnished luxury London townhouse.Omaze  Sponsored Links A New Nasal Spray Protects Your Nose From Infection Within 55 Seconds – How Does It Work?Cambridge NewsThese Twins Were Named “Most Beautiful In The World,” Wait Until You See Them TodayPost Fun  Sponsored Links Bowels: A Simple Trick to Empty Them CompletelyGut Solution  Sponsored Links Best Electric Mopeds To Buy This YearDrivingElectricTry Not To Laugh At These Photos Of Actors With Their Stunt DoublesPost Fun  Sponsored Links ‘You could see the tendons’: Phillip Schofield reacts to Dancing On Ice pro Yebin Mok’s ‘shocking’ injury – as she hopes to return to second live showPhillip Schofield has reacted to Dancing On Ice pro Yebin Mok’s ‘shocking’ injury, saying you could see the tendons in her leg.TV&ShowbizGetting this Treasure is impossible! Prove us wrongHero Wars  Sponsored Links Insta-fail! Laura Byrne suffers an embarrassing fail as she humorously misspells popular style of dressThe Bachelor’s Laura Byrne shared an Instagram story on Thursday that left some of her followers giggling.TV&ShowbizDo This To Cut Your Bills By Up To £290 TodayLook After My Bills  Sponsored Links

We are no longer accepting comments on this article.Australian prisoner speaks about ordeal in Bali jail he calls ‘Hell’s hallway’ – but insists he did nothing wrong ‘investigating the anti-aging properties’ of a local drugTravis James McLeod, 43, from Perth was arrested in Bali in November after police allegedly found him with 0.86g of meth, but couldn’t also charge him with possessing kratom as it is not yet illegal.News‘That’s my insider tip’: Dancing On Ice host Holly Willoughby predicts Myleene Klass will win the show due to her ‘musicality’ and skill as a performerTV&ShowbizSunrise panellist suffers a very unfortunate hair fail as one of her extensions falls out during a live broadcastTV&ShowbizHad an ISA? You could be owed ThousandsThe Investment Review  Sponsored Links Restrictions will be eased in Sydney next week if cases remain low and more people get tested for coronavirus as NSW records zero local casesGladys Berejiklian has said restrictions will be eased for Sydney if cases remain low.NewsScientifically Proven: New Nasal Spray Protects From VirusesExpress for NasusPour Salt Down Your Drain At Night, Here’s WhyHealthyGem  Sponsored Links by TaboolaSponsored LinksFROM THE WEBBowels: A Simple Trick to Empty Them CompletelyGut SolutionThese Twins Were Named “Most Beautiful In The World,” Wait Until You See Them TodayPost FunDo This To Cut Your Bills By Up To £290 TodayLook After My Bills