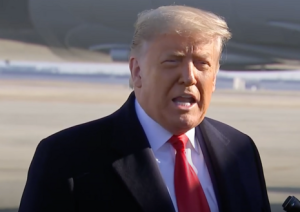 “I think that Big Tech is doing a horrible thing for our county and to our country, and I believe it’s going to be a catastrophic mistake for them,” Trump said as he embarked from a plane in a Jan. 12 video published by C-SPAN. Trump commented that Americans are already mobilizing in response to the unprecedented censorship: “There’s always a countermove when they do that. I have never seen such anger as I see right now, and that’s a terrible thing — a terrible thing. And you have to always avoid violence.”

Trump condemned all political “violence,” including riots, which occurred over the summer. He further suggested Big Tech plays a unique role in being “divisive” for America.