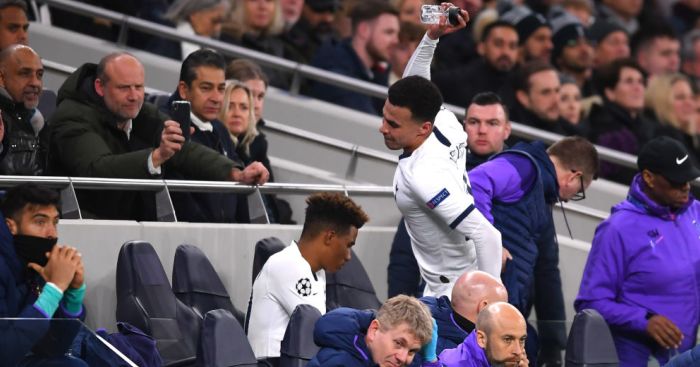 Dele Alli was reportedly left furious by Tottenham chairman Daniel Levy’s refusal to allow an option to buy clause in any possible loan deal with Paris Saint-Germain scuppered the move.

Alli, 24, looked set to leave the Tottenham Hotspur Stadium in January. The England midfielder has fallen out of favour with Spurs chief Jose Mourinho.

From being a regular starter under Mauricio Pochettino, the talented midfielder has barely featured this term. He has made just four top-flight appearances and one start in 2020-2021.

The former Milton Keynes Dons ace has played six times in the Europa League. But he needs regular league action if he is to be considered for England’s campaign at this summer’s delayed European Championship.

With Pochettino now in charge of PSG, a reunion seemed on the cards. An 18-month loan deal was mooted but the Ligue 1 giants wanted Spurs to grant them the opportunity to buy.

And, according to 90m, that seems to have been the stumbling block to his winter exit. Levy was unprepared to lose a player who the north Londoners have invested time and money in.

The chairman also feels he could return to his best form and wants to stick with an international class player. Alli is said to cut a frustrated figure at Tottenham, with little sign of anything changing in the near future.

Spurs take on Chelsea in the Premier League on Thursday night. Alli is currently injured but would probably have been on the bench.Tottenham v Chelsea Match Preview, February 04, 2021

Mourinho may have won many trophies in his managerial career but he is a man who polarises option. He has tended to fall out with players in previous jobs to the detriment of both the player and team.

There is no sense that the same thing will happen at Spurs but there is clearly tension between the two men. On the club’s ‘All or Nothing’ series on Amazon Prime, Mourinho told Alli he was a ‘lazy’ trainer.

While he also praised the schemer, it seems as though the damage was done.

Thoughts will soon turn to England. Three Lions boss Gareth Southgate is a known admirer of Alli but has options in  midfield.

Phil Foden, Jack Grealish and James Maddison have upped their game this season. The trio have a real chance of makings Euro 2020 and Alli needs action.

HAVE YOUR SAY IN OUR FORUM

Ozan Kabak ‘the best defender in Europe’ according to Liverpool fan ​

Top shout that. Always said he was quality…Read more

Liverpool practice screams in training ahead of Tottenham game ​

Don’t hold back lads, let it all out…Read more

Revealed: How Danny Drinkwater injured himself in a swimming pool ​

Got a bit carried away there…Read more

They’re taking it on the chin. Specifically, Chris Wilder’s….Read more

Landing on his feet…Read more

Just that little bit too keen for a half-time cuppa, ref?…Read more

A power move or an act of generosity?…Read more