A strong 6.2-magnitude earthquake has struck off the coast of Vanuatu.

The tremor hit 90 kilometres west of Port-Vila at about 12pm local time on Tuesday, according to the US Geological Survey.

The earthquake struck at a depth of 10 kilometres.

There are no tsunami warnings following the shock.

A strong 6.2-magnitude earthquake has struck off the coast of Port-Vila, Vanuatu (pictured)

It comes less than a week after the area was rocked by a 7.7-magnitude earthquake, which triggered a small tsunami.Read More

The quake struck at just after midnight on Thursday local time about 415 kilometres east of Vao in New Caledonia at a depth of 10 kilometres.

It said waves reaching between 0.3 and one metre above the tide level were possible for Fiji, New Zealand and Vanuatu.

A wave of 0.3 metres struck Fiji, according to the Twitter feed of the island nation’s seismology department.

‘The seismology observatory upon its assessments has now verified and confirmed the cancellation of the warning and ‘all clear information’ (is) issued to the whole Fiji group,’ it said. 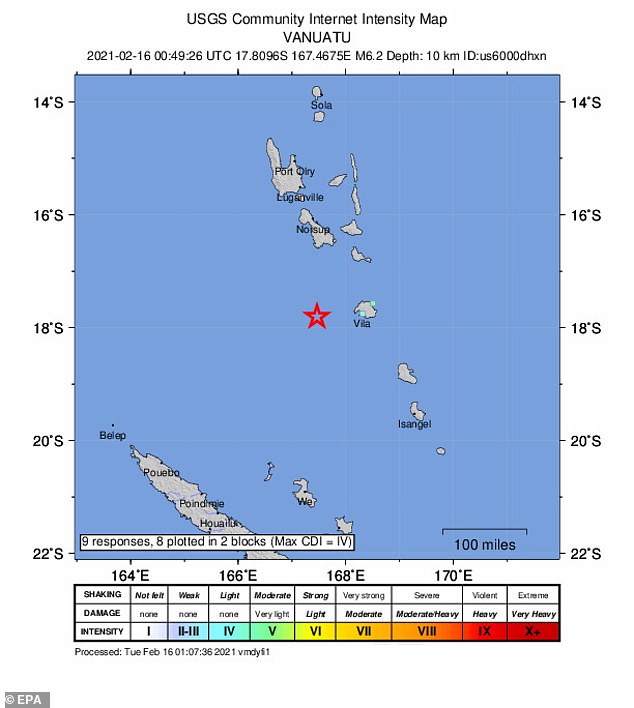 The tremor hit 90 kilometres west of Port-Vila at about 12pm local time on Tuesday, at a depth of 10 kilometres, according to the US Geological Survey

The Australian Bureau of Meteorology confirmed in a tweet that a tsunami had been generated.

The bureau warned of a threat to Lord Howe Island, which is about 550 kilometres (340 miles) east of Australia’s mainland, but said there was no need for evacuations.

Locals in the Vanuatu capital Port Vila said they felt the quake but there was no damage from either the shake or subsequent waves.