Revealed – the price of lockdown that we can NEVER repay: From damage to our children’s education to a surge in mental health issues, and industries on their knees

The impact of lockdown goes far beyond merely controlling the virus, with the negative effects seeping into almost every area of life. Here we examine the toll it’s continuing to take every day…

Children in England will have lost 850million hours of in-person teaching by the time schools are due to reopen on March 8. Exams have been cancelled for two years running and university courses have moved almost exclusively online, with student dissatisfaction at a record low of 40 per cent. 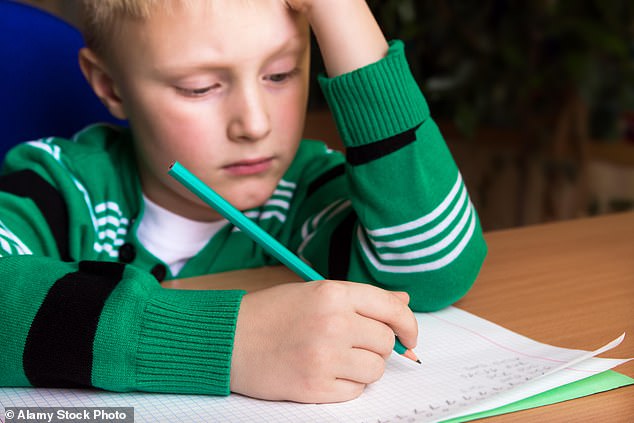 Children in England will have lost 850million hours of in-person teaching by the time schools are due to reopen on March 8Epidemiologist: Gov should take ‘stepwise approach’ with schoolsLoaded: 0%Progress: 0%0:00PreviousPlaySkipMuteCurrent Time0:00/Duration Time0:34FullscreenNeed Text

Last year was the worst on record for cancer waiting times in England. The number of patients starting treatment plummeted to the lowest level for ten years. Cancer surgery figures dropped by a third during the first wave – with 21,700 fewer operations from April to August. Millions are now trapped in a backlog for vital screening programmes.

Experts warn that NHS waiting lists could more than double from a record high of 4.52million at the end of December to ten million by April. GPs made six million fewer referrals for hospital treatment in 2020 than in 2019, as patients stayed away. The number of people waiting more than a year for treatment has rocketed by more than 7,000 per cent in a year.

The economy shrank by 9.9 per cent in 2020, marking the biggest decline in GDP since the Great Frost of 1709. At the same time, falling tax receipts and soaring spending on Covid-support schemes meant the Government borrowed a record £270.8billion in the first nine months of the financial year – £212.7billion more than the same period a year earlier. Borrowing for the full year is set to be close to £400billion and the national debt now stands at £2.1trillion, or 99.4 per cent of national income – the highest level since 1962.

The economy shrank by 9.9 per cent in 2020, marking the biggest decline in GDP since the Great Frost of 1709

The impact on jobs and employment has been severe. Unemployment has risen by 350,000 to 1.7million since the start of pandemic, and forecasters had predicted 2.6million will be out of work by the summer. The furlough scheme is propping up more than five million jobs and is forecast to cost £62billion in 2020/21.

HOSPITALITY ON ITS KNEES

Close to one million jobs disappeared from the sector in 2020, and a million more are still on furlough. Britain also lost almost 6,000 licensed premises last year, a third of which are pubs. Hospitality businesses missed out on an estimated £71.8billion of sales last year, and rolling lockdowns forced landlords to pour 87million pints of beer down the drain.

Close to one million jobs disappeared from the sector in 2020, and a million more are still on furloughWhen can we return to scenes like this? Pubs full last summerLoaded: 0%Progress: 0%0:00PreviousPlaySkipMuteCurrent Time0:00/Duration Time1:31FullscreenNeed Text

One of the cruellest aspects of the crisis has been bans on visits to care home residents. Experts believe these rules have led to thousands of deaths from isolation and loneliness. Family visits are essential to the mental and physical wellbeing of the UK’s 410,000 care home residents, 70 per cent of whom have dementia – but many have been denied hugs from loved ones for nearly a year.

DAMAGE TO OUR MENTAL HEALTH

One in five adults experienced either moderate or severe depressive symptoms in June, almost double the level recorded before the pandemic. NHS trusts have predicted a 20 per cent increase in demand for their mental health services – and one in six children say they have suffered difficulties during the Covid lockdowns.

Airlines alone have had to take on more than £5billion of additional debt to stay afloat as bookings plummeted by more than 90 per cent in some months last year. British Airways, easyJet, Jet2, TUI and Ryanair have published pre-tax losses of more than £5billion since the crisis began, with the aviation sector having shed about 100,000 jobs.

Airlines alone have had to take on more than £5billion of additional debt to stay afloat as bookings plummeted by more than 90 per cent in some months last year (pictured: Heathrow Airport’s Terminal 5, March 2020)

The pandemic has created an unprecedented backlog. There are more than 56,000 crown court cases waiting to be heard, while magistrates are sitting on a caseload in excess of 400,000. Some victims will be forced to wait years before their cases are heard. Meanwhile, the numbers of rape and domestic violence cases continue to rise.

VITAL DOCUMENTS CAUGHT UP IN CHAOS

By summer, a backlog of more than 400,000 passport applications had built up – and around 150,000 births could not be registered with town halls shut. As many as 127,000 paper driving licence applications were waiting to be dealt with in September, while learners faced six-hour waits just to book a test.

Retail had its worst year for a quarter of a century, with almost 200,000 jobs lost and 16,000 stores closing. This year is expected to be even worse, with 20,000 premises forecast to shut. There are now approximately 35,000 empty sites across the UK – with the highest vacancy rate since records began in 2012 – turning once-thriving areas into ghost towns.

Price of lockdown: Why we could struggle to recover from the effects of the Covid-19 pandemic

There Are 7 Types of English Surnames — Which One Is Yours?Ancestry  Sponsored Links These Twins Were Named “Most Beautiful In The World,” Wait Until You See Them TodayGive It LoveWhat if you invested $1K in Netflix a year ago?eToro  Sponsored Links Do You Have Royal Blood? Your Last Name May Tell You.Ancestry™  Sponsored Links This Is Why The Royal Family Kept Quiet About Prince Harry’s SisterBridesBlush89 Photos That Prove Prince William Is A Lucky ManHooch  Sponsored Links Spacing Oxford’s Covid vaccine out by 12 weeks is MORE effective than a six-week gap, finds studyCrucially for Britain’s current strategy, the first dose also offers 75 per cent protection on its own for 12 weeks. Immunity kicks in after 22 days following vaccination.NewsOne person is guaranteed to win this three-million pound London house and it could be you.Omaze  Sponsored Links Part of tunnel at Euston protest site COLLAPSES on bailiff in latest eviction attempt as HS2 wins court order against activists and says they should quit underground complex IMMEDIATELYThe protesters, who have been underground for more than three weeks, are trying to stop HS2’s plans to replace the green space outside Euston station in central London with a temporary taxi rank.NewsJoin my new project, my new fight – Fortune & FreedomFortune and Freedom  Sponsored Links

By posting your comment you agree to our house rules.Submit CommentClearRider, 41, who sued owner of ‘naughty’ horse that ‘reared up’ and crushed her during the Beaufort Fox Hunt loses £100,000 legal battle as judge rules the animal probably had heart attackLisa Ford suffered multiple fractures, including a smashed pelvis and internal injuries, when her horse fell backwards onto her while she was riding on the Badminton Estate in September 2018.NewsMillionaire nightclub boss Jeremy Gordeno is handed a suspended prison sentence for failing to pay £20,000 owed to his ex-wife NewsMore than 10% of COVID-19 survivors are still fatigued and unable to taste or smell six MONTHS after recovering from the infection, survey findsHealthFind out how you can buy stocks without paying commissioneToro  Sponsored Links ‘Intelligent, curious, social’ dolphins have developed similar personality traits to HUMANS despite having evolved in vastly different environments, study reveals Psychologists at the University of Hull studied 134 bottlenose dolphins across eight countries for their almost decade-long study.ScienceNew Retirement Villages in Wombourne Are Turning HeadsSenior Living | Search AdsThe Royal Family Is Cringing At Meghan Markle’s New Net WorthBridesBlush  Sponsored Links by TaboolaSponsored LinksFROM THE WEBThere Are 7 Types of English Surnames — Which One Is Yours?AncestryThis Is Why The Royal Family Kept Quiet About Prince Harry’s SisterBridesBlushThese Twins Were Named “Most Beautiful In The World,” Wait Until You See Them TodayGive It Love