Debris from a Boeing 777 rained down on suburban Denver Saturday after an engine exploded at 15,000ft and terrified passengers watched a fire rage below the aircraft’s wing.

The United Airlines flight bound for Hawaii was forced to make an emergency landing shortly after taking off from Denver when it suffered major damage to one of its engines. ADVERTISEMENThttps://8e6ab89e71ccda8a1d4a2b3174e445ef.safeframe.googlesyndication.com/safeframe/1-0-37/html/container.html?n=0

The pilot can be heard in a mayday call asking air traffic control for permission to immediately turn the aircraft around, before he made a safe ‘textbook’ landing. https://www.oo-syringe.com/prod/AMP/minute-media-player.html?content_type=specific&content_id=01ev70mdf0ek75pyv5%2301esryb7r7vba1k4sj

Video recorded by passengers aboard Flight UA328, which was carrying 231 travelers and 10 crew members, shows the engine engulfed in flames.

Passengers have described feeling the heat from the fire and many believed they were just moments dying. Miraculously, there were no reported injuries either on board or on the ground. 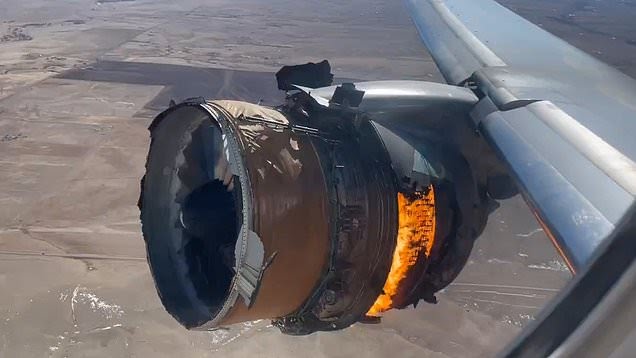