Sarah Everard investigation: Body found at woodland near Ashford identified as that of missing woman

A body found in woodland is that of missing 33-year-old Sarah Everard.

It was announced on Wednesday human remains were found at land near Great Chart, Ashford, but today they have been formally identified.

“I can now confirm this has been formally identified as Sarah. A post-mortem examination is now taking place.

“Specialist officers are in constant contact with her family and have updated them on this terrible news.

“We continue to support them as best we possibly can in these truly dreadful circumstances.

“A Metropolitan Police officer who was arrested on suspicion of Sarah’s murder remains in custody.

“Our investigation continues with hundreds of officers working around the clock to find out exactly what has taken place.

“I know that the public feel deeply hurt and angry and I speak on behalf of all my colleagues when I say that we too are horrified.

“I understand that women in London and the wider public, particularly those in the area where Sarah went missing, will be worried and may well be feeling frightened.

“Londoners are likely to continue to see extra officers on the streets in the coming days.https://e9dc6cc5c57bf232b23999d4efaeafce.safeframe.googlesyndication.com/safeframe/1-0-37/html/container.html?n=0

“Please know our officers are committed to keeping you and your loved ones safe. Our dedication to serve the people of London is undiminished.”

The woodland where Ms Everard’s body was found is next to the sprawling 44-acre Great Chart Golf and Leisure complex.

Behind the abandoned facility police have sealed off Fridd Lane as they continue to search a wood close to the railway line.

Four police vans and unmarked vehicles are parked in the remote country lane, and a blue shipping container-like structure and portaloo have been set up at the side of the road.

A resident who lives nearby says the Fridd Lane site has become a fly-tipping hotspot, particularly during lockdown. 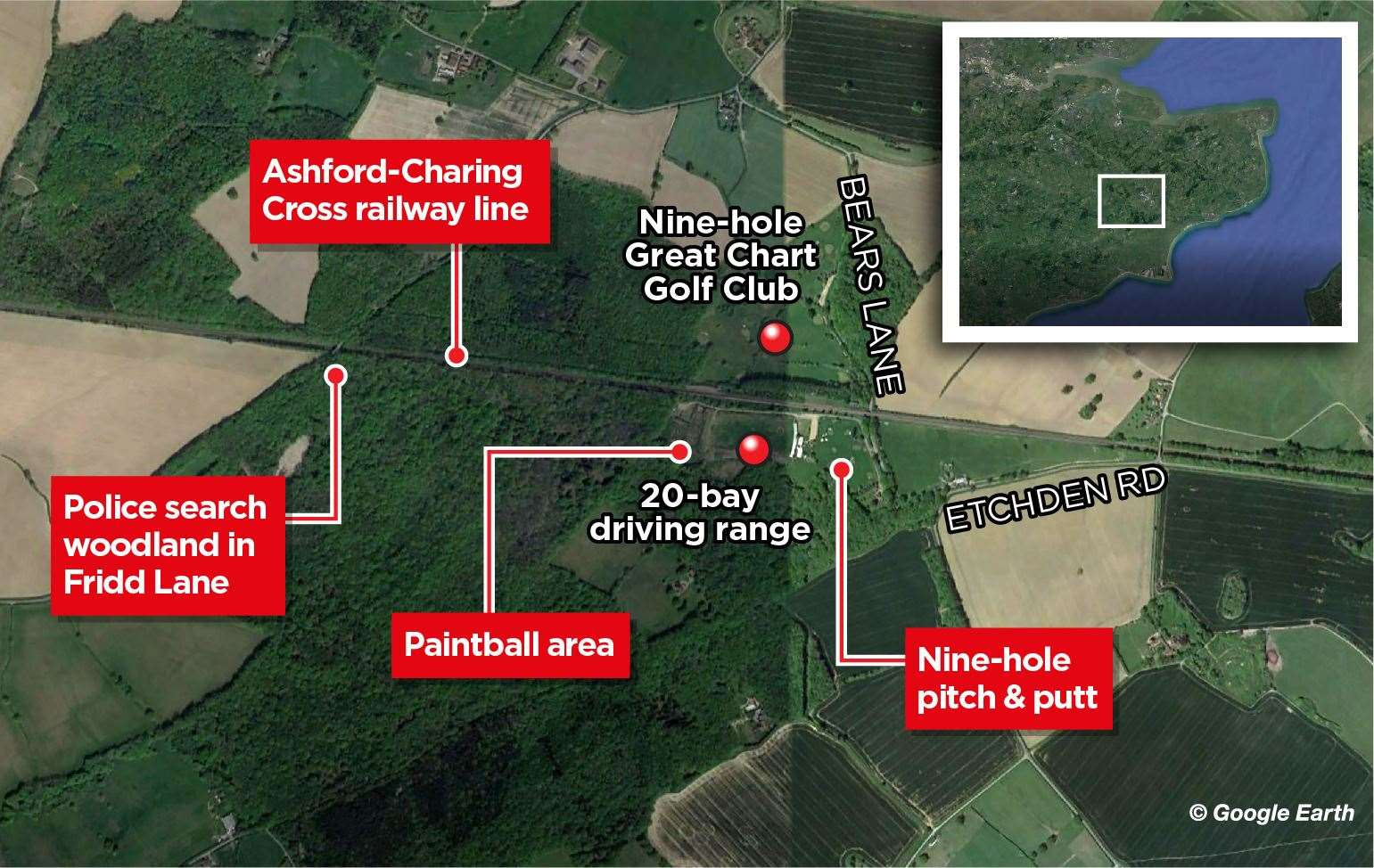 Flowers have been laid at the entrance to the site, which was a popular paintball, archery and golf facility before it closed unexpectedly in 2019.

One tribute read: “Sarah, wherever you are… I wish I could be there.”

Another: “Sarah, we may be strangers but all I can do is hope it’s not you. Our hearts are breaking thinking of your family.”

Police remain at the scene and yesterday more vehicles, including a team of police divers, arrived.

Floodlights and welfare units were set up in the car park on Wednesday night.

More welfare units arrived on the back of a lorry yesterday, suggesting police intend to spend far longer at the site.

And private ambulances were seen arriving at the site but left soon after.

The complex is in a very rural area and around 150 officers and air support are combing many acres of land, which is 30 miles from Couzens’ home.

In June 2019, the owners gained planning permission for 10 executive homes on part of the site in the hope it would secure the future of the attraction, but construction is yet to begin.

Kent Police has told the public to expect a large presence of officers in the area in the days to come.

Forensics officers are also combing fields behind his home.

At the property in Freemen’s Way a second tent has been set up in the fenced off garden while forensics teams are combing fields behind the property.

Both family cars were removed on Wednesday and there was also a search of woodland in nearby Betteshanger Park.

He was arrested there at 8pm on Tuesday alongside a woman in her 30s who was detained on suspicion of assisting an offender.

Police are also searching a derelict garage which was run by Couzens’ family.

Couzens, 48, worked at BCB Garage for 20 years before joining the police.

The site closed in 2015 after 48 years and now sits derelict.

Officers have been on the scene since Wednesday and have been keeping a round-the-clock guard.

Military tunnels which the site backs on to are the scene of activity today but Kent Fire and Rescue Service insisted it was an “unrelated training exercise”.

When the site closed Couzens, then 42, said: “He [dad] would have really loved one of us to take over but he totally understands.

“Things have to come to an end. I am devastated, I was there for 20 years myself.

“We’ve grown up with my dad always being there. It’s a huge part of our lives. An family institution.”

He worked there at the same time as serving as a decorated Territorial Army reservist.

In 2004, he is reported to have “excelled at a battalion-run driving course”.

In the Met his main job was uniformed patrol of diplomatic premises. He was not on duty at the time of Ms Everard’s disappearance.

The diplomatic protection squad is responsible for guarding the Parliamentary estate including Downing Street and the Palace of Westminster, as well as embassies in London.

Meanwhile the Met is being probed for its handling of an allegation of flashing against Couzens.

He is alleged to have exposed himself in a fast food restaurant in south London on February 28, three days before Ms Everard “vanished into thin air” while walking home.

Detectives are questioning him for a third day having been granted a custody extension.

Yesterday he was rushed to hospital under armed guard after being found in his cell with a serious head injury. He was back in custody last night.

The Met has made made five referrals to the Independent Office for Police Conduct (IOPC), including the one relating to the exposure allegation.

Two were linked to Couzens’ conduct and the IOPC has determined both these matters should be locally investigated by the Met.

The IOPC is assessing the severity of reports into the police’s actions after Ms Everard disappeared and the circumstances surrounding Couzens’ head injuries.

The Met confirmed he was being monitored by CCTV when he sustained the injuries while alone in his cell and received immediate first aid.

Met Commissioner Cressida Dick sought to reassure the public in the wake of the developments, saying “it is thankfully incredibly rare for a woman to be abducted from our streets”.

She added: “But I completely understand that despite this, women in London and the wider public – particularly those in the area where Sarah went missing – will be worried and may well be feeling scared.”

She added: “The news that it was a Metropolitan Police officer arrested on suspicion of Sarah’s murder has sent waves of shock and anger through the public and through the whole of the Met.

“I speak on behalf of all my colleagues in the Met when I say we are utterly appalled at this dreadful news. Our job is to patrol the streets and to protect people.”

Investigators are continuing to work “around the clock” on what Ms Dick described as a “very fast moving” case.

A neighbour of the Great Chart complex told a national paper: “The police were searching ditches and outbuildings. They knocked on our door and asked to search our buildings which of course was fine.

“The officer said they were from the Met and looking for a ‘high risk missing person’. They had the helicopters out with their searchlights on until about 4am.

“The area they’re searching has been empty for a couple of years. It’s so remote. Someone would have to know the area, to come here. We only ever get locals round here. It used to be a golf complex and a leisure facility with paintballing. It backs on to woods. There have been more than 20 officers here since last night and they had the sniffer dogs out.”

John Chidwick, 67, told a paper: “He had some timber sheets going spare and I asked if I could have them to build a manure box for my allotment. He was a nice, friendly bloke and well spoken.

“He hadn’t been living on the road all that long, about four years give or take, but seems to be a family man as most people around here are. I know he’s a police officer.”

Marketing executive Ms Everard vanished while walking home from a friend’s flat in south London on Wednesday, March 3. She was last captured on a doorbell camera walking along the A205 Poynders Road towards Tulse Hill at around 9.30pm.

Home Secretary Priti Patel added: “Every woman should feel safe to walk on our streets without fear of harassment or violence. At this deeply sad and tragic time as we think and pray for Sarah and her family.”

Meanwhile, a vigil titled “Reclaim these streets” that was due to take place at Clapham Common bandstand at 6pm on Saturday evening would be unlawful, says the Met.

Organisers plan to seek an order in the High Court today challenging the Met’s interpretation of coronavirus restrictions when read against human rights law.

On the reason for the vigil, the group said said: “It’s wrong that the response to violence against women requires women to behave differently. In Clapham, police told women not to go out at night this week. Women are not the problem.

“We’ve all been following the tragic case of Sarah Everard over the last week. This is a vigil for Sarah, but also for all women who feel unsafe, who go missing from our streets and who face violence every day.”

Vigils are also being held in Kent this weekend.

To get the latest updates in ongoing cases, police appeals and criminals put behind bars, click here