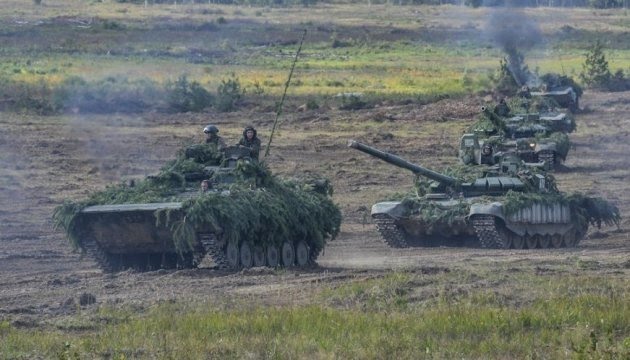 Several videos shot in the Rostov region of Russia, showing a large column of tanks and armored personnel carriers of the Russian army moving along a highway just 30 kilometers from the state border with Ukraine, have surfaced on the Internet, according to the InformNapalm international intelligence community.

“Yesterday, on September 19, videos shot by drivers on dash cams in the village of Rodionovka in the Rostov region of the Russian Federation surfaced on the Internet. The videos recorded a large column of Russian army tanks and armored personnel carriers moving along a highway just 30 kilometers from the state border with Ukraine,” the report reads.

According to InformNapalm analysts, “this may be a bad signal of preparation for the offensive operation of the Russian troops, given that yesterday Russia’s envoy in the Trilateral Contact Group on the situation in Donbas Boris Gryzlov made a nervous statement that the talks of the Normandy Four are allegedly under the threat of disruption because Ukraine refused to sign the ‘Steinmeier formula,’ to which its representatives had previously agreed to.”

“This formula actually satisfies Moscow’s desire to secure a special status for Donbas and create a buffer zone that has signs of capitulation by Ukraine,” the community said.

It also recalled that preparations for the withdrawal of Ukrainian troops are underway along the entire contact line in Donbas. “Although the Ukrainian side is hoping for a ‘mirror disengagement,’ which was discussed by Commander of the Ukrainian Joint Forces Volodymyr Kravchenko at a meeting with UNDP Resident Representative in Ukraine Osnat Lubrani, but Russian troops appear to be moving their armored groups to the border,” the report reads.

InformNapalm suggests that the demonstrative movement of Russian armored battalion tactical groups to the border may have signs of psychological pressure on Ukraine’s leadership to reach an agreement on the “Steinmeier formula.”

Earlier, Ukrainian Foreign Minister Vadym Prystaiko said that the “Steinmeier formula” regarding the effect of the law on a special status for Donbas and the disengagement of troops at three sections had been discussed and agreed on at a meeting of advisers to the leaders of the Normandy Four countries.

He said that the Ukrainian authorities were considering holding local elections throughout the country, including in the temporarily occupied territories of Donetsk and Luhansk regions.

Ukrainian President Volodymyr Zelensky said that the “Steinmeier formula” and all points of the Minsk Agreements would be considered at the Normandy Four summit.

Russian presidential aide Yury Ushakov said that at the Normandy format summit it is necessary to record on paper “cast-iron agreements” on the disengagement of troops in Stanytsia Luhanska, Zolote and Petrivske, a special status for Donbas and the so-called Steinmeier formula.https://d-36569062023426601454.ampproject.net/2103240330002/frame.html

While citing and using any materials on the Internet, links to the website ukrinform.net not lower than the first paragraph are mandatory. In addition, citing the translated materials of foreign media outlets is possible only if there is a link to the website ukrinform.net and to the website of a foreign media outlet. Citing and using materials in offline media, mobile apps, Smart TV are allowed only with written permission from Ukrinform. News and publications marked as “Advertisement” and “PR” and articles in the section “Releases” include promoted content, and an advertiser is responsible for the content.