Police have sparked outrage after a woman was ‘stripped’ down to her underwear and carried away by four officers during a protest. 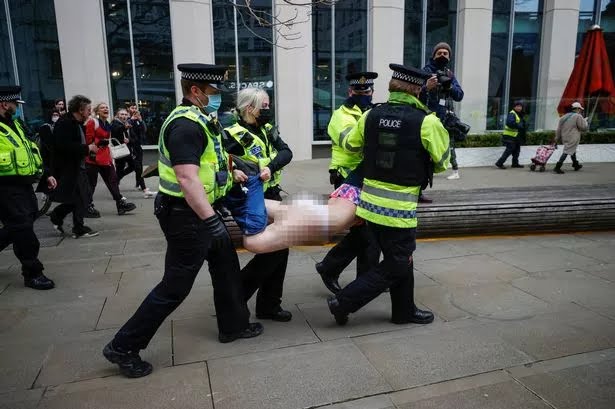 The woman said she was treated in a ‘violent’ way(Image

The 22-year-old was photographed with her jeans pulled down and her top bunched up around her shoulders as she was dragged away, after being arrested at the Kill the Bill event in Manchester.

She was one of demonstrators on Saturday evening publicly opposing the Police, Crime, Sentencing and Courts Bill, which will afford police powers to break up peaceful protests, Manchester Evening News reported.

Riot officers moved in when a small group of protesters sat down and blocked tram lines in St Peter’s Square before dragging people away from the area, according to campaigners.

It appeared that as the woman was carried off, her jeans were pulled down leaving her exposed in just her underwear.

An officer made attempts to pull her jeans back up, but not before the scene was captured by a number of photographers.