By HENRY MARTIN FOR MAILONLINE

Belarusian airlines will be banned from entering UK airspace ‘unless specifically authorised’, Grant Shapps has said.

The Transport Secretary revealed the government is ‘taking further action’ following the removal of permission for Belavia to operate to and from Britain.

The move comes after Boris Johnson warned the treatment by Belarus of a captured journalist and prominent government critic would ‘have consequences’.

Roman Protasevich was on board a Ryanair flight from Athens to Vilnius on Sunday when it was forced to change course to head for the Belarus capital after a reported bomb scare, escorted by a MiG fighter jet.

He was arrested and, in a video released by Belarusian authorities on Monday evening, appeared to admit he was involved in organising mass protests in Minsk last year. 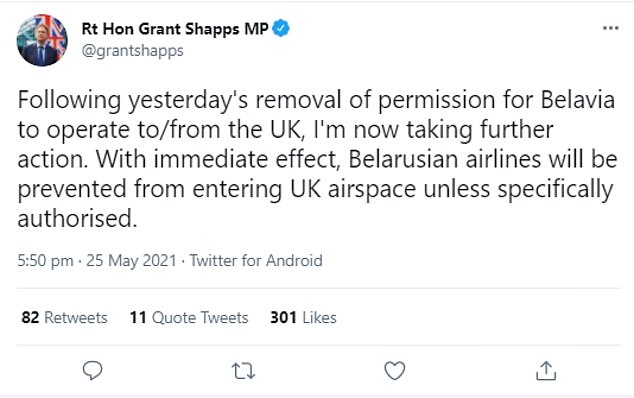 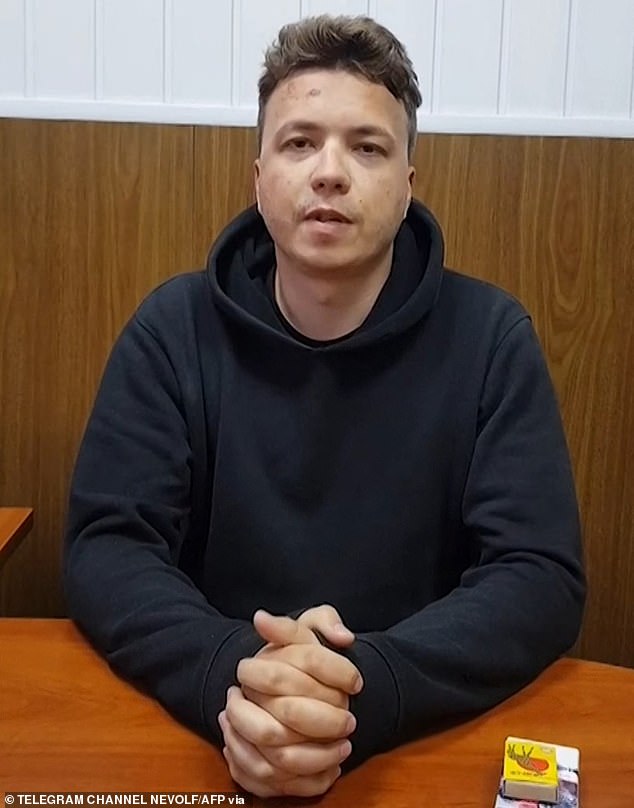 Roman Protasevich was on board a Ryanair flight from Athens to Vilnius on Sunday when it was forced to change course to head for the Belarus capital after a reported bomb scare, escorted by a MiG fighter jet

The Prime Minister said the video was ‘deeply distressing’ and called for Mr Protasevich’s release.

He tweeted: ‘The video of Roman Protasevich makes for deeply distressing viewing.

‘As a journalist and a passionate believer in freedom of speech I call for his immediate release. Belarus’ actions will have consequences.’

Although Belavia, the country’s state-owned airline, does not have any scheduled flights through UK airspace, the Department for Transport said it had done so in the past, flying to places such as north Africa and Ireland

It follows Monday’s announcement that the EU and the UK would issue new sanctions against Belarus in light of the arrest, with Mr Shapps instructing the Civil Aviation Authority to request airlines avoid Belarusian air space ‘to keep passengers safe’.

On Monday, he also suspended the operating permit for Belavia, while EU leaders have called on member states to do similar.

Alexander Lukashenko has been president of Belarus since the post was established in 1994 and won re-election for a sixth time in 2020 with 80% of the vote, in a ballot deemed ‘neither free nor fair’ by the European Union.

Pictured:  Belarusians and Poles gathered in Warsaw in a protest against Belarussian president Lukashenko after his authorities forced Ryanair plane to land in Minsk and detained opposition journalist Raman Pratasevich

Since winning the disputed election last August, Mr Lukashenko has cracked down on dissenting voices, with many opposition figures arrested and others forced into exile.

Mr Johnson’s comments came after one of his Cabinet ministers said there was reason to suspect the statement by Mr Protasevich was not ‘offered voluntarily’.

Work and Pensions Secretary Therese Coffey told Sky News: ‘I don’t think it would come as any surprise (if the statement had been coerced). But I’m not in a position to tell you exactly what our latest intelligence is on the coercion or not of this.

‘But all I can say is the behaviour of the Belarus regime does not lend itself to think in any way that this statement was offered voluntarily.’

Speaking in the early hours of Tuesday in Brussels, European Council president Charles Michel said the events were ‘unacceptable, shocking and scandalous’.

‘We will not tolerate that they play Russian roulette with the lives of innocent civilians,’ he added.

Foreign Secretary Dominic Raab has suggested Russia could have been involved with the operation to divert the plane on Sunday.

He said it was ‘very difficult to believe’ the seizure of Mr Protasevich from the flight could have taken place ‘without at least the acquiescence of the authorities in Moscow’.

Mr Raab said that although the situation was not yet clear, the relationship between Minsk and Moscow suggested Russian leaders may have been aware of the plans in advance.

Ryanair boss Michael O’Leary said the incident was a ‘state-sponsored hijacking’ and claimed agents from Russia’s KGB were on board the flight.

‘It was clear it appears that the intent of the Russian authorities was to remove a journalist and his travelling companion. We believe there was also some KGB agents offloaded from the aircraft as well,’ he said.

How to Measure Software Delivery Success With Pipeline AnalyticsSplunk  Sponsored Links How to secure your remote workforcePerimeter 81Peloton, Rolls-Royce, Spirit Airlines and more – our top stock picks for 2021eToro  Sponsored Links This strategy game is good for your brain. No Install.BaseAttackForce  Sponsored Links Easy way to get £100,000 life cover If You’re Under 65Smart InsuranceYou Could Win a Coastal Home in DevonOmazeGet Offer  Sponsored Links Lottie Moss sets pulses racing posing in nude and black lingerie as she shares sultry BTS snaps from sexy shoot The blonde beauty and sister of Kate Moss, 23, looked incredible in the nude set which was adorned with delicate black hearts as she worked the camera.TV&ShowbizOne person is guaranteed to win this Omaze Cotswolds house worth over £2,500,000Omaze  Sponsored Links Bachelor vet Ryan Sutter FINALLY finds out what his mystery illness is after getting sick a year ago… and it’s something Justin and Bella have been diagnosed withTurns out the reality TV favorite, 46, has been suffering from Lyme Diseases – something Justin Bieber and Bella Hadid have been diagnosed with – which was made worse by mold.TV&ShowbizIf you own a mouse, you have to try this game. No Install. Play for free.BaseAttackForce  Sponsored Links

No comments have so far been submitted. Why not be the first to send us your thoughts, or debate this issue live on our message boards.

By posting your comment you agree to our house rules.Submit CommentClearVictoria Beckham turns heads in a quirky white dress with a ruffled bib as she heads out in NYC after enjoying a date night with husband DavidFormer Spice Girl Victoria, 47, is not stranger to putting on a fashionable display and her outing on Tuesday was no exception as she stunned in a long white dress in New York.TV&ShowbizTransgender teenager, 15, ‘who had self-harmed after viewing Tik Tok videos’ told counsellor he was having suicidal thoughts hours before he was hit by train, inquest hearsNewsMoney really CAN buy you friends! People tend to have bigger social circles after winning the lottery, study finds ScienceLearn how you can invest in leading brands with 0% commission with eToroeToro  Sponsored Links Biden will send $75million in aid to Palestinians this year after far left Democrats including AOC say the ceasefire is ‘not enough’ The Biden administration will ask Congress for $75 million in aid to Palestinians, Secretary of State Antony Blinken said Tuesday.News5 Myths About Equity Release Over 60s Should Knowwith Telegraph Media GroupIf You Own A Computer This Strategy Game Is A Must-Have!Total Battle: Tactical War Game  Sponsored Links BingSite WebEnter search term:Search