NATO squares up to Russia: Britain’s £3bn aircraft carrier HMS Queen Elizabeth leads war games with US and 9 other nations in Atlantic as they practise deploying to the Black Sea – days before Biden meets Putin

By ROSS IBBETSON FOR MAILONLINE

HMS Queen Elizabeth has led 19 Nato warships in war games off Portugal as they practise deploying to the Black Sea in a display of maritime strength just days ahead of Vladimir Putin‘s meeting with Joe Biden.

The £3 billion pride of the Royal Navy was joined by vessels from the US and eight other allied nations for operation Steadfast Defender on Friday – starting off the coast of Portugal last week, it will conclude with ground exercises in the Black Sea region later this month amid simmering tensions with Russia.

Nato chiefs insist the military exercises, involving 9,000 troops, are not aimed at Russia specifically, but they focus on the Black Sea region where Moscow deployed thousands of troops ahead of military drills throughout mid-April.

The display brought back memories of Russia’s annexation of Crimea in 2014 and prompted US President Joe Biden to schedule a summit with Putin which will take place in Geneva later this month.

Following four years of unorthodox foreign policy under Donald Trump, Biden has said: ‘It’s time to remind everybody who we are.’

It comes as Foreign Secretary Dominic Raab prepares to make his own rebuke of Putin’s ‘aggressive behaviour’ during a Nato summit later today.

‘From Russia’s aggressive behaviour towards Ukraine to Lukashenko’s assault on civil aviation, democratic values are under attack,’ Mr Raab told The Telegraph ahead of the meeting.

‘As one of the biggest contributors to Nato, UK support for the transatlantic alliance is unwavering. We will work with Allies and partners to defend our allies and our values.’

The Nato operation coincides with HMS Queen Elizabeth’s maiden voyage that will see her visit 40 countries over the next six months as Britain demonstrates its position as a global superpower post-Brexit. 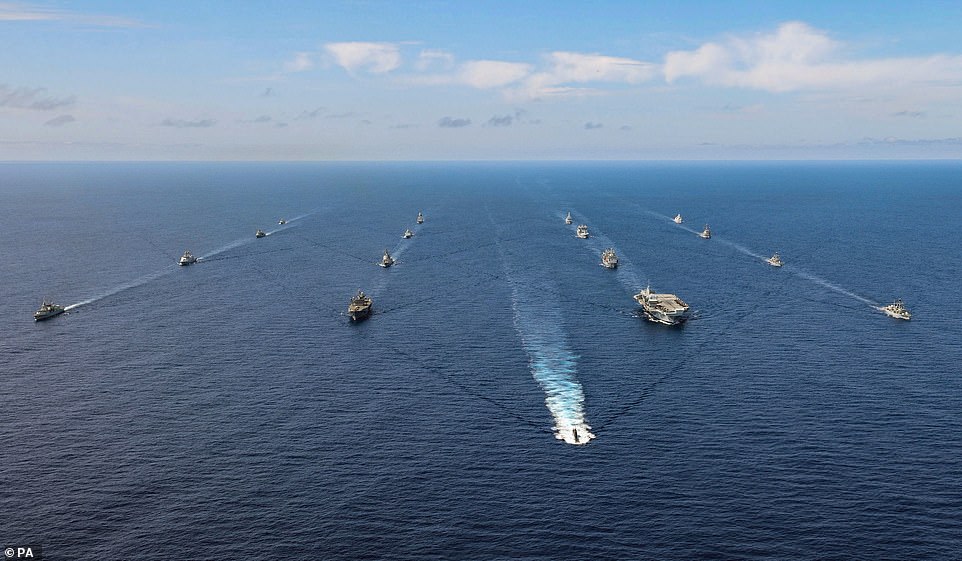 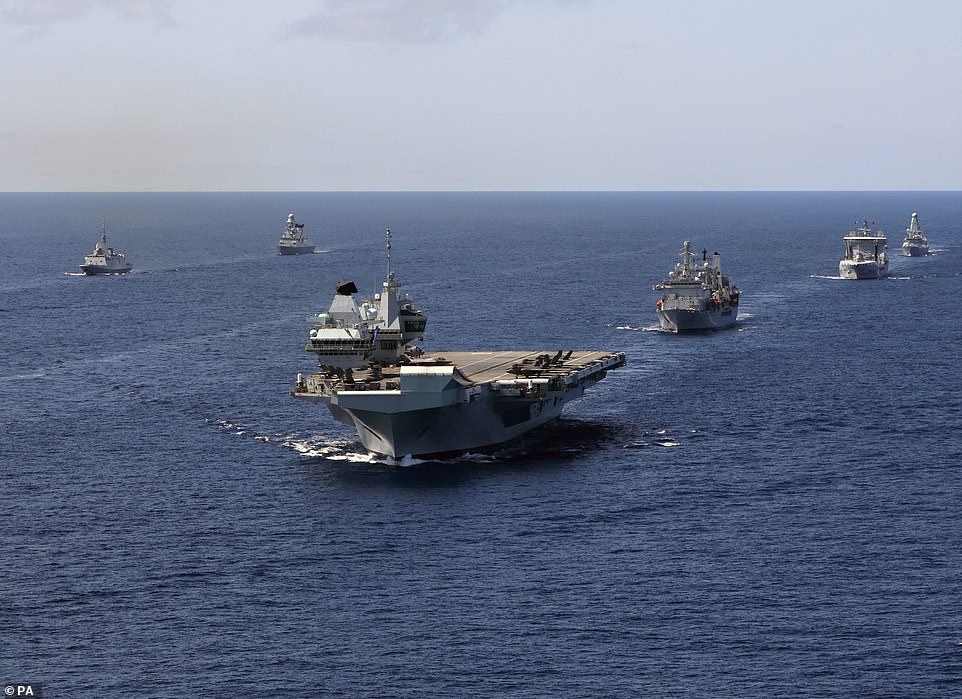 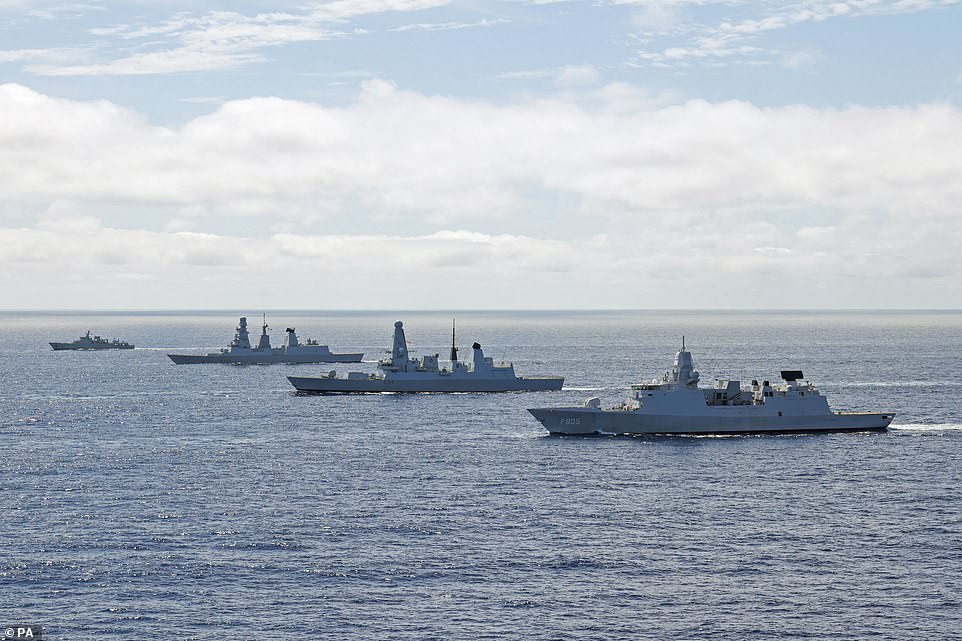 The flotilla included submarines, destroyers and frigates from Britain, Canada, Denmark, France, Germany, Italy, Spain, Turkey and the US 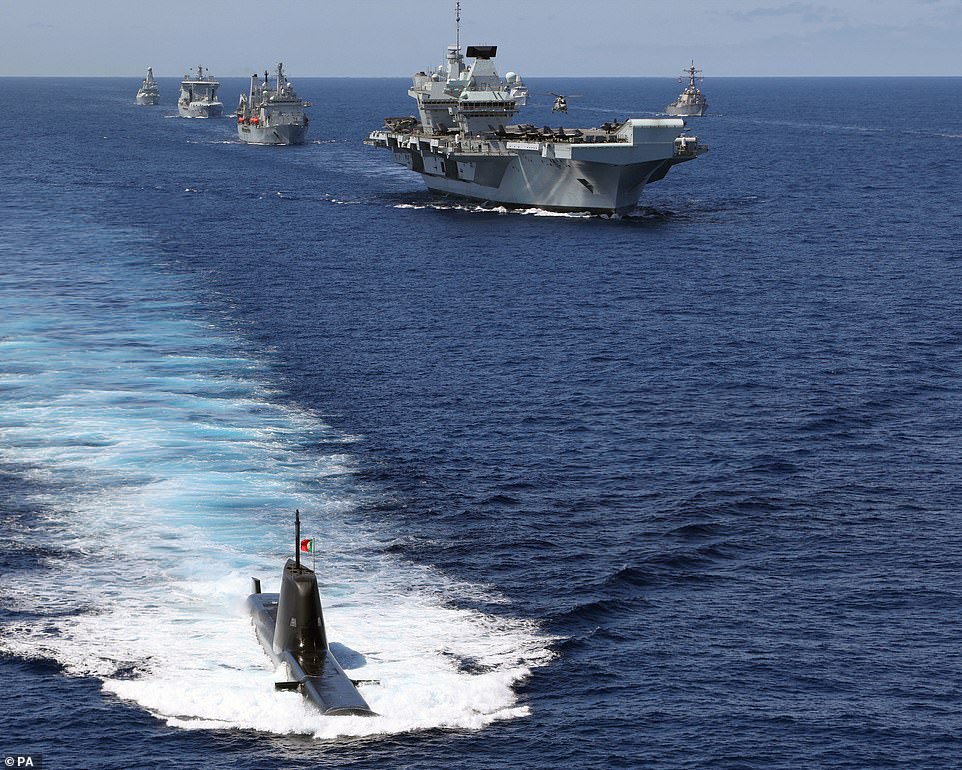 The carrier is ‘a hugely powerful statement,’ Commodore Steve Moorhouse, the ship’s commanding officer and captain said on deck off the Portuguese coast as F-35 jets took off around him last week.

‘It shows that we are a global navy and wanting to be back out there,’ he said. ‘The aim for us is that this deployment will be part of a more persistent presence for the United Kingdom in that region,’ he added, referring to the Indo-Pacific that includes India and Australia.

Nato launched a massive spending initiative after Russia annexed the Crimea from Ukraine in 2018 and wants to deter Putin from incurring any further into Europe.

The alliance’s secretary-general Jens Stoltenberg says the exercises send an important message to any potential adversary: ‘Nato is ready.’

‘Nato is there to defend all our allies, and this exercise sends a message about our ability to transport a large number of troops, equipment across the Atlantic, across Europe and also to project maritime power,’ he said aboard HMS Queen Elizabeth.

Mr Stoltenberg will chair a Nato summit in Brussels on June 14, with US President Joe Biden and his counterparts keen to usher in a new era of transatlantic co-operation, as troops leave its longest-ever mission in Afghanistan while tensions mount with Russia, and increasingly China.

The war games tie in two new Nato command centres, one in Norfolk, Virginia; the other in Ulm, Germany.

Part of the focus of its first phase was to protect the undersea cables that carry masses of commercial and communications data between the US and Europe.

Nato says Russia is mapping the cables’ routing and might have darker intentions.

‘We all lulled ourselves into thinking that the Atlantic was a benign region in which there was not anything bad going on, and we could just use it as a free highway,’ said Norfolk’s commander, US Navy Vice-Admiral Andrew Lewis.

‘There are nations are out there mapping those cables. They may be doing something else bad. We have to be aware of that and answer that.’ 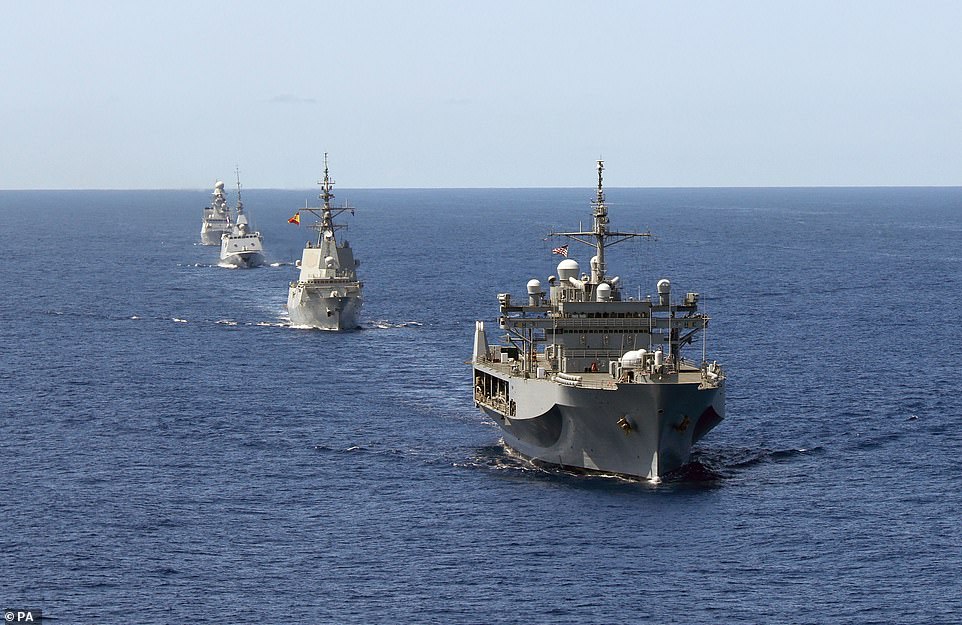 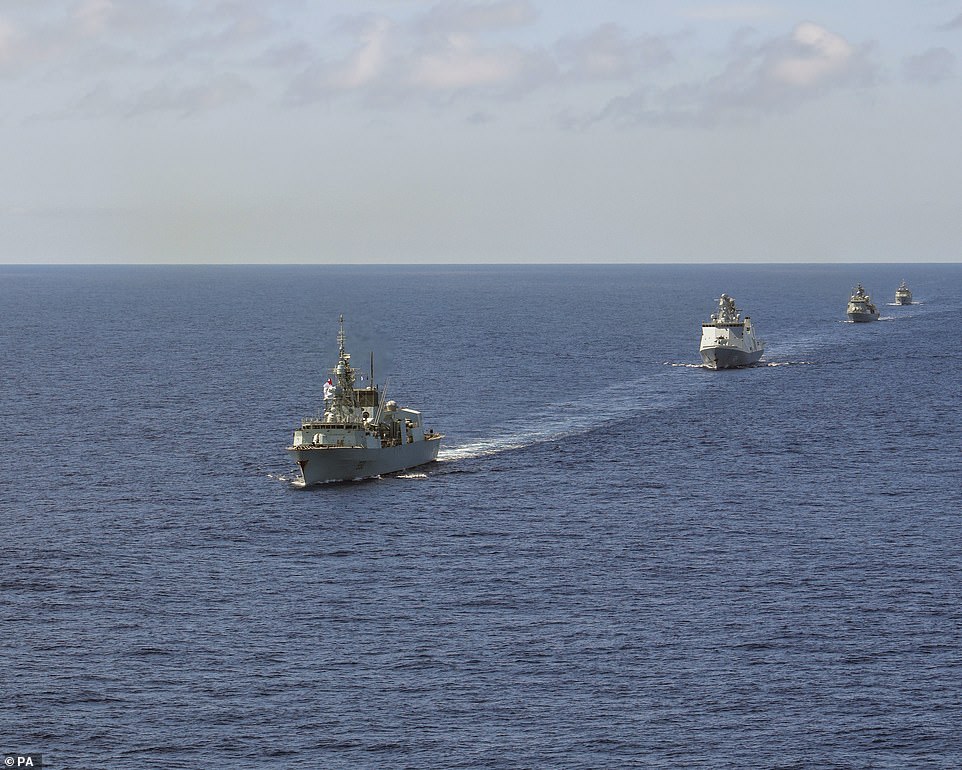 The Nato mission is dubbed Steadfast Defender 2021. NATO Secretary General Jens Stoltenberg said: ‘Exercise steadfast defender 2021 will test Nato’s readiness and military mobility – with forces deploying across land and sea, all the way from north america to the black sea region and off the coast of Portugal. With over 9,000 troops from more than 20 allies and partners, the exercise demonstrates that Nato has the capabilities and the resolve to protect all allies against any threat.’ 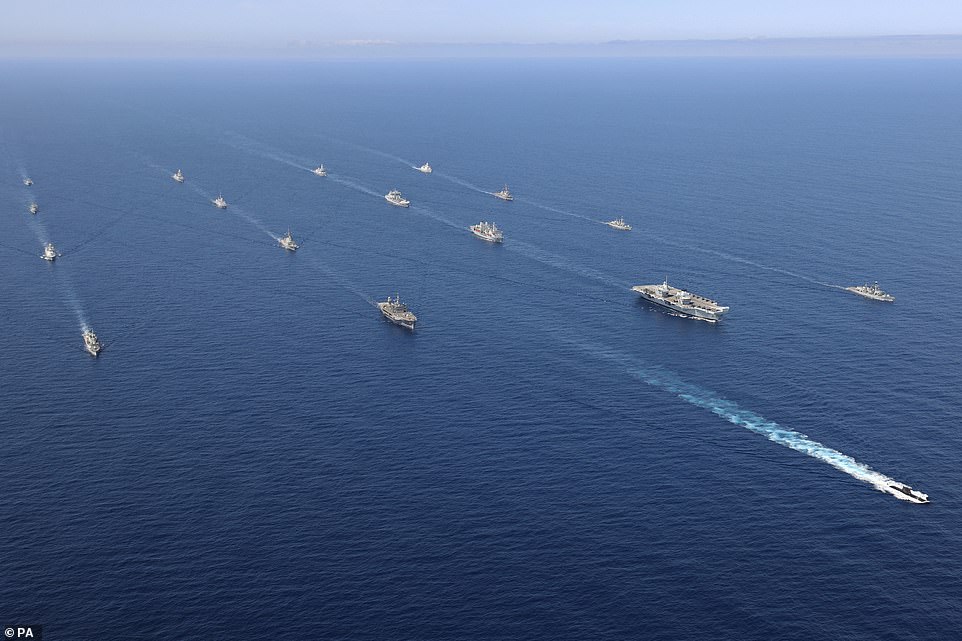 The UK Carrier Strike Group includes ships from the United States Navy, The Dutch Navy, and Marines from the US Marine Corps. As well as UK Frigates, Destroyers, two RFA supply ships and air assets from 617 Sqn, 820 NAS, 815 NAS and 845 NAS. 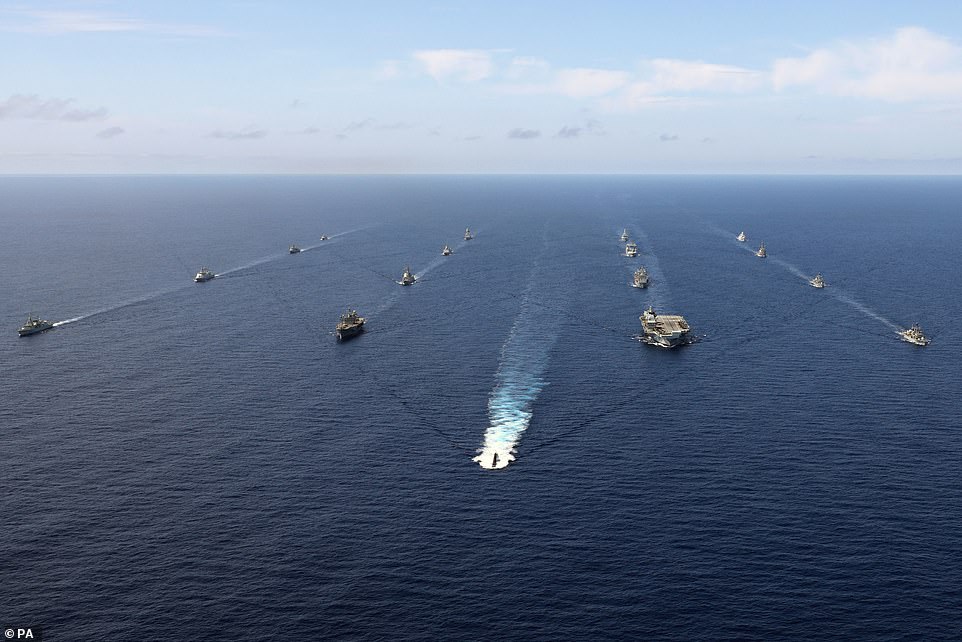 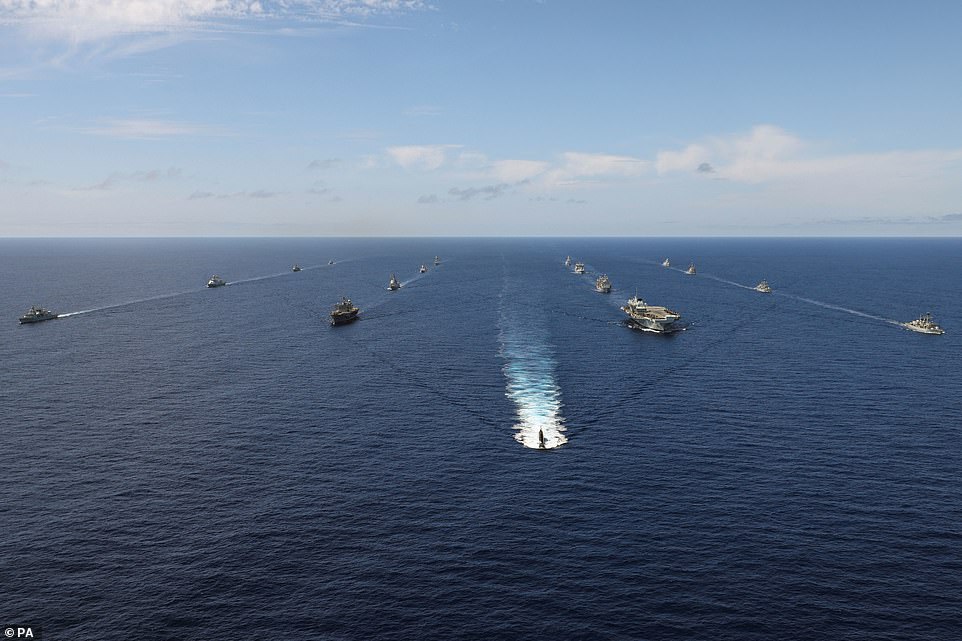 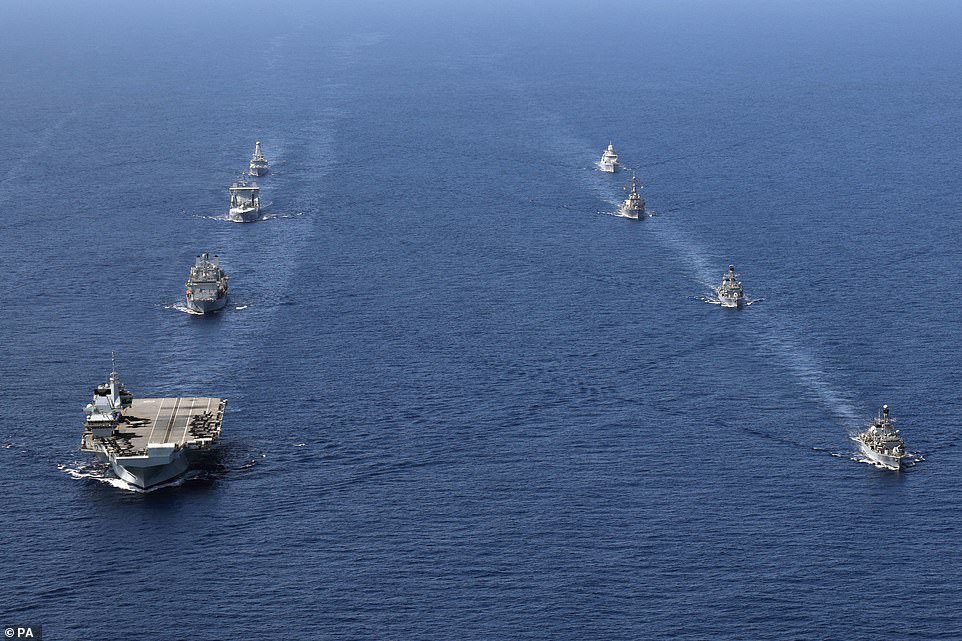