Covid infections in England spike 76% to 86,000 and R rate rises to between 1 and 1.2 as Indian variant surges – but just 0.07% of people who’ve caught the mutant strain ended up in hospital despite being fully vaccinated

The number of people with Covid in England spiked 75 per cent in seven days to 86,000 last week, official figures show – but only 0.07 per cent of people catching the Indian variant have been admitted to hospital despite being fully vaccinated.

Weekly Office for National Statistics numbers round off a week of piling evidence that the virus is rebounding in Britain since lockdown rules were lifted, with the number of infected people surging from 48,500 last week.

Despite the surge in cases, scientists and ministers will draw confidence from Public Health England data that last night suggested just one in 1,400 people have ended up in hospital so far after catching the new variant having had two jab doses – the risk appears 10 times lower than it is for unvaccinated people.  Dailymail.co.uk: News, Sport, Showbiz, Celebrities from Daily Mail0:46PauseNext video0:48 / 2:00SettingsFull-screenRead More

Promising figures show just seven people out of 9,427 confirmed cases spent the night in hospital despite having had two jabs – only 0.07 per cent – compared to 90 who were unvaccinated (0.95 per cent).

One dose reduces the risk by about three quarters, to one in 400 from one in 100, but doesn’t offer as much protection as being fully vaccinated.

Unvaccinated people will be at a higher risk from Covid than they were with the old variant, PHE has confirmed, because it spreads up to twice as fast – so they will be more likely to get infected – and appears to increase the risk of hospital admission by up to 2.6 times.

The figures will bolster the case for the June 21 ‘Freedom Day’ unlocking to be pushed back to buy more time to get second doses to more people. So far 26.4million people have had two jabs while 39.8m have had their first.

‘Professor Lockdown’ Neil Ferguson has taken a cautious stance warning evidence about the variant was not positive ‘in any respect’ and that the mutant strain appeared to be between 30 and 100 per cent more virulent than the previously dominant Kent variant and that ‘a good central estimate’ would be 60 per cent. 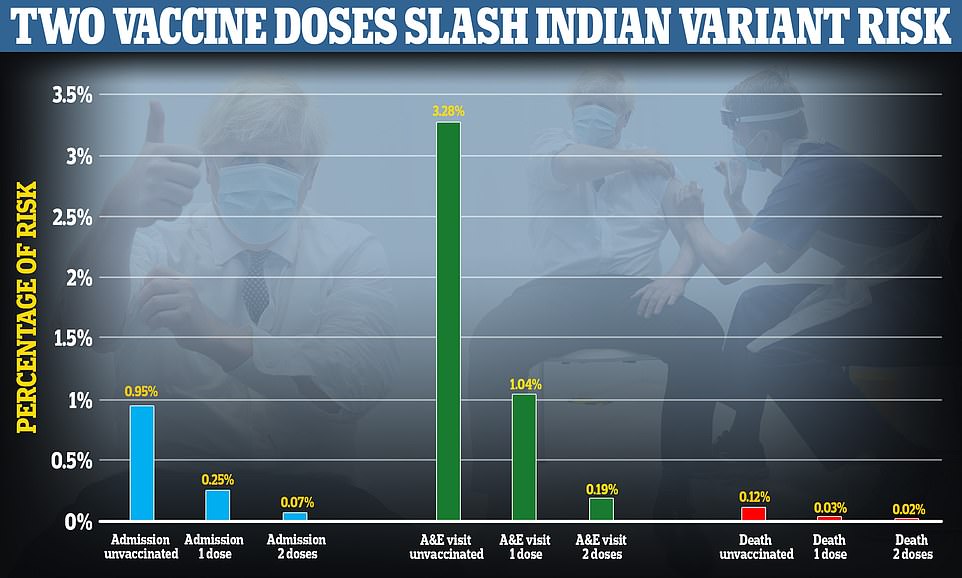 Public Health England data show that just 0.07 per cent of confirmed Indian variant cases were admitted to hospital despite having had two doses of a vaccine, compared to 0.95 per cent of unvaccinated people. Significantly more unvaccinated people also went to A&E or died after catching the virus. Having had a single dose of a jab offered middling protection but experts say that now the Indian strain is dominant it is crucial that people get both jabs 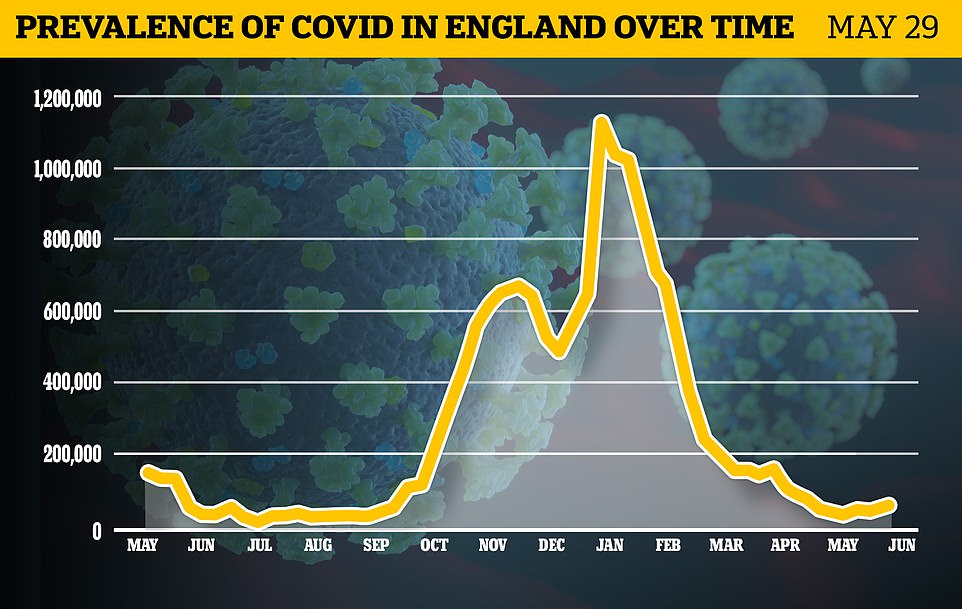 The number of people with Covid in England spiked 75 per cent in seven days to 86,000 last week, official figures show as SAGE member Professor Neil Ferguson warned the Indian variant could be spreading up to twice as fast 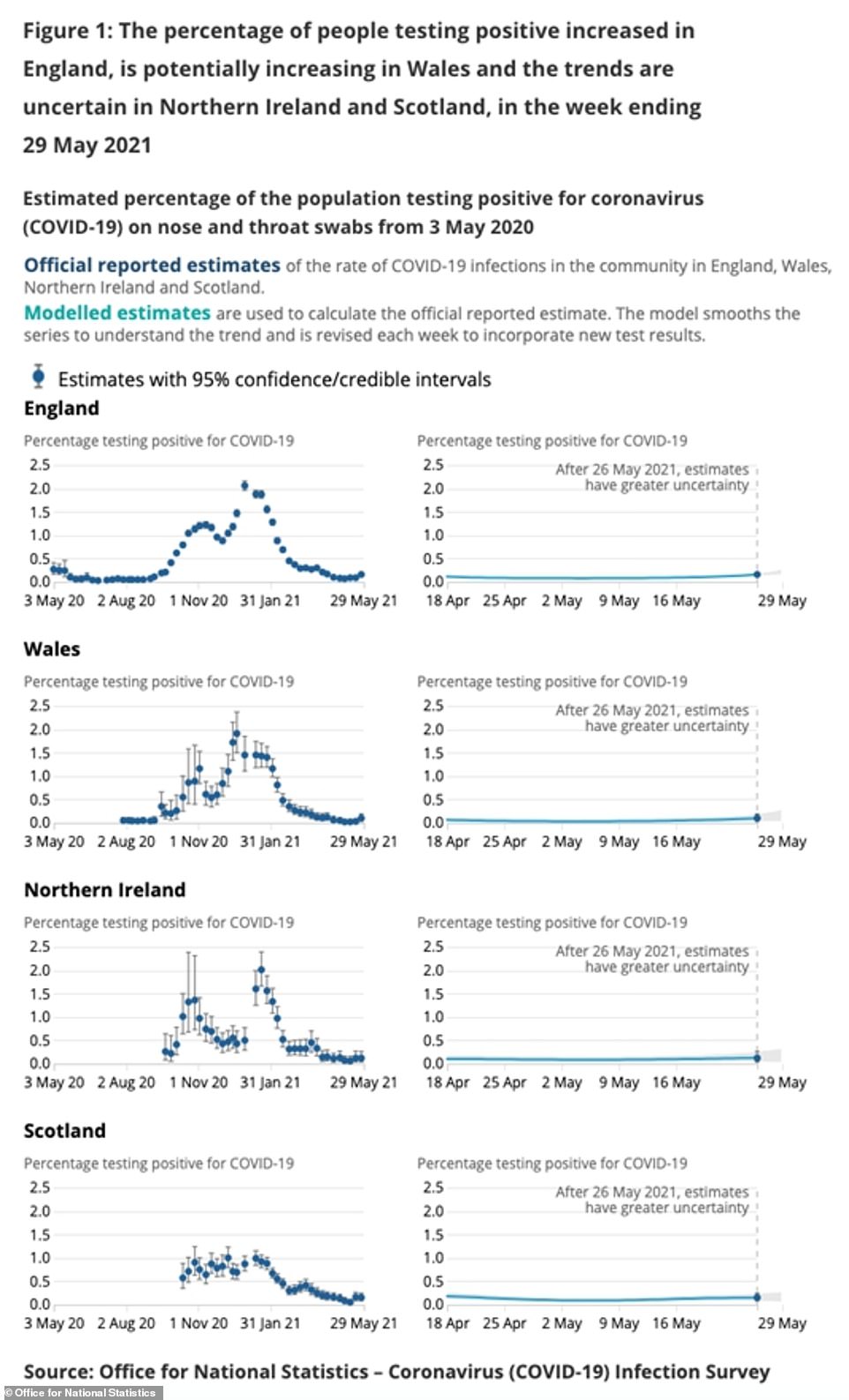 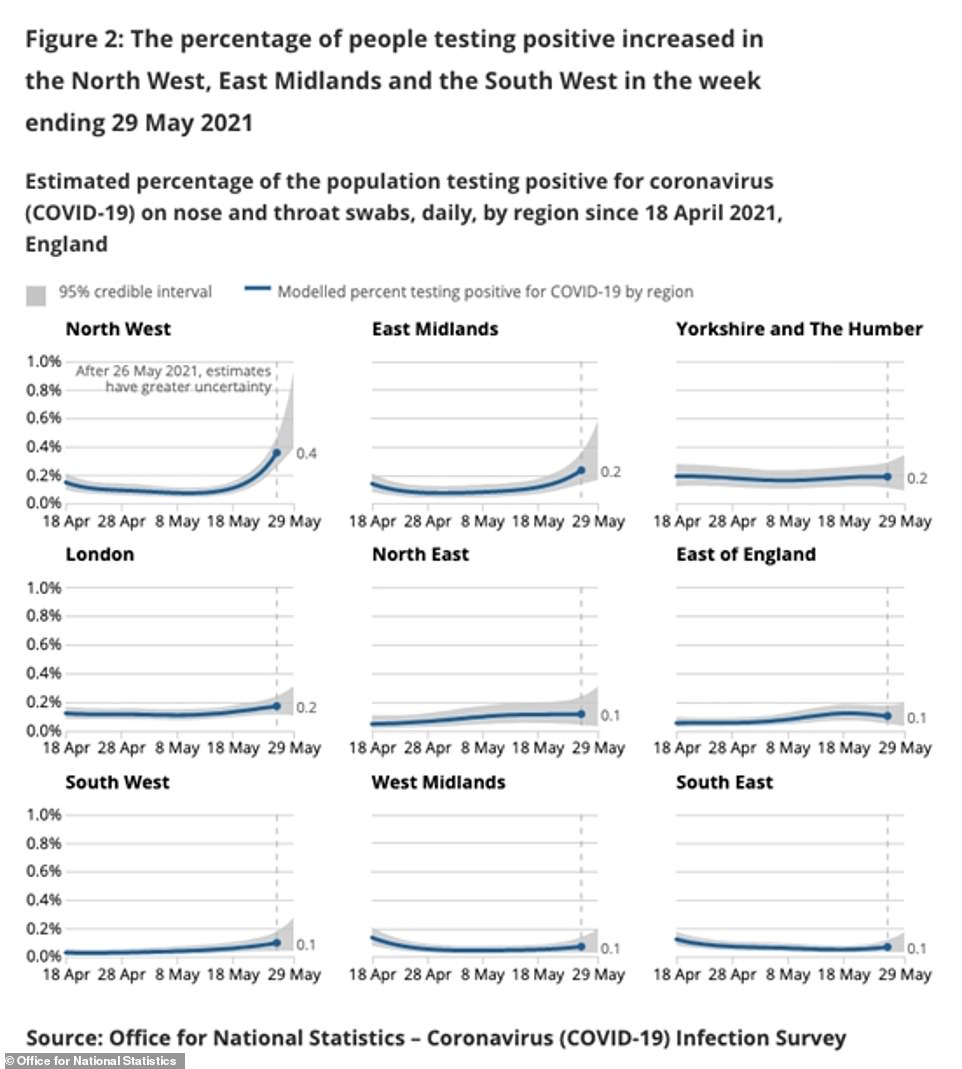