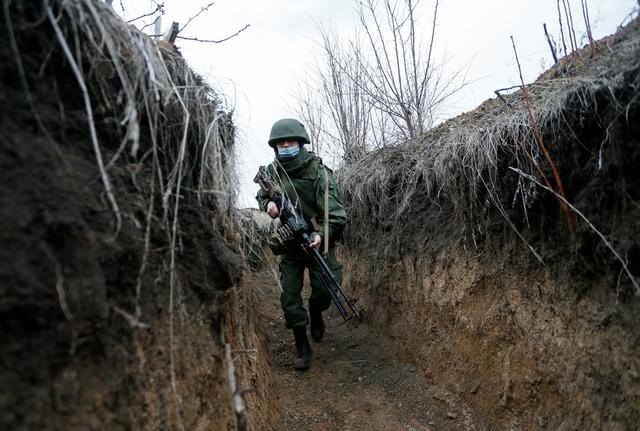 A militant of the self-proclaimed Luhansk People’s Republic (LNR) walks in a trench at fighting positions on the line of separation fro7i ok kkj mom the Ukrainian armed forces in the settlement of Donetskyi in Luhansk Region, Ukraine April 8, 2021.REUTERS/ALEXANDER ERMOCHENKO 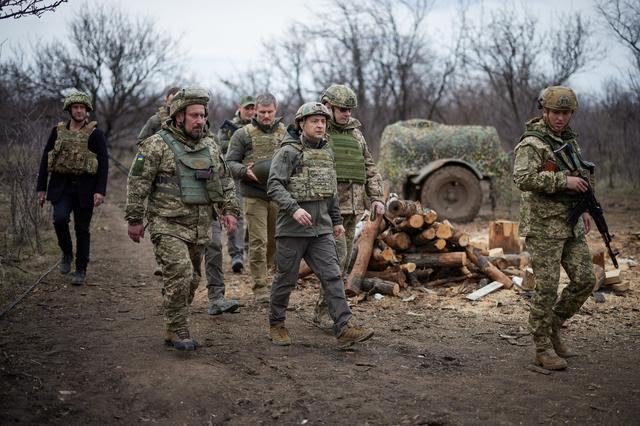 BERLIN/MOSCOWBERLIN/MOSCOW (Reuters) -German Chancellor Angela Merkel told Russian President Vladimir Putin on Thursday to pull back the Kremlin’s military build-up near the border with Ukraine, while he in turn accused Kyiv of “provocative actions” in the conflict region.

Ukraine has raised the alarm over an increase in Russian forces near its eastern border as violence has risen along the line of contact separating its troops from Russian-backed separatists in its Donbass region.

“The Chancellor demanded that this build-up be unwound in order to de-escalate the situation,” Germany’s government said in a readout of a telephone call between Merkel and Putin.ADVERTISEMENThttps://8796b90572c429e0f63d2de6ec23179d.safeframe.googlesyndication.com/safeframe/1-0-38/html/container.html?n=0

Russia has said its forces pose no threat and are defensive, but they would stay there as long as Moscow saw fit.

The Kremlin dismissed a Ukrainian accusation that the build-up was intended to distract from domestic issues, including jailed opposition leader Alexei Navalny, ahead of September parliamentary elections.

“This has nothing to do with any detainees or anyone,” Dmitry Peskov told Reuters. Russia has to react with caution when it has “such a restless region as Ukraine near our borders with the potential for renewed hostilities”, he added.

A senior Kremlin official said on Thursday that Moscow could under certain circumstances be forced to defend its citizens in Donbass and that major hostilities could mark the beginning of the end of Ukraine as a country.

The Kremlin said in its readout of the Merkel phone call that “Vladimir Putin noted provocative actions by Kyiv which is deliberately inflaming the situation along the line of contact.”ADVERTISEMENT

Ukraine’s President Volodymyr Zelenskiy flew to eastern Donbass in a show of support on Thursday two days after he called on NATO to lay out a path for Ukraine to join the military bloc, whose expansion Moscow fiercely opposes.

The rouble hit a five-month low on Wednesday a day after Russia said it had begun a planned inspection of its army’s combat readiness involving thousands of drills.

“I support the assessment that the start of military action – this would be the beginning of the end of Ukraine,” the deputy head of Russia’s presidential administration said.

At a news conference, Kozak was asked if Russia would protect its citizens in eastern Ukraine.

Referring in his reply to Srebrenica, where 8,000 Muslim men and boys were killed by Bosnian Serb forces during Bosnia’s 1992-1995 war, he said: “It all depends on the scale of the fire. If there is, as our president says, Srebrenica, apparently we will have to step in to defend (them).”ADVERTISEMENT

Ukraine and Western countries say Donbass separatists have been armed, led, funded and aided by Russians. Moscow has denied interfering. While a ceasefire halted full-scale warfare in 2015, sporadic fighting continued.

All quotes delayed a minimum of 15 minutes. See here for a complete list of exchanges and delays.