In a demonstration of the failure of Germany’s pursuit of so-called “green energy” and its policy of relying on Russian gas in the meantime, a coal-fired power plant will be reconnected to the nation’s electricity grid.

While the economic powerhouse of Europe — so called — scrambles to secure energy sources before the winter months, the previously shuttered Mehrum coal power plant in Lower Saxony will become the first to once again be connected to Germany’s grid.

On Monday, the manager of the Czech-owned EGH operating company,  Kathrin Voelkner said: “We have declared the return to the electricity market. We assume that we will return to the grid in the short term,” according to the Frankfurter Neue Presse newspaper. 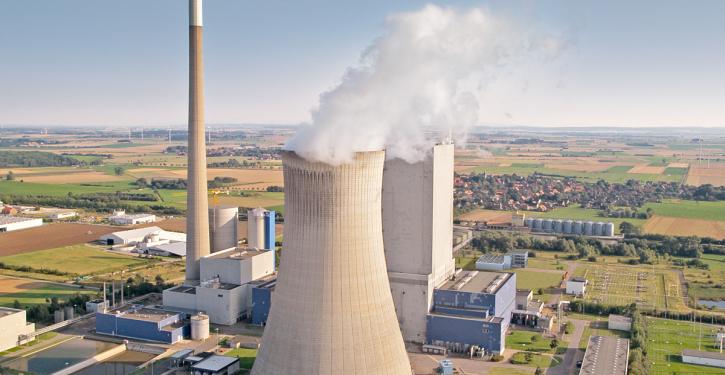 The Mehrum hard-coal-fired power plant with a capacity of 690 MW is to replace natural gas plants. (Image: Kraftwerk Mehrum GmbH)

Bonn (energate) – The Mehrum hard-coal-fired power plant in Hohenhameln, Lower Saxony, returned to operation from the reserve on 1 August. So far, the plant is the only one in Germany to have been registered for recommissioning from the emergency reserve. This is made possible by the so-called Ersatzkraftwerkebereithaltungsgesetz (EKBG – Substitute Power-Plant Standby Act) and its associated ordinance. According to this law, coal-fired power plants that are scheduled for shutdown or are in the reserve may return to the market until April 2023. This way, less natural gas is to be converted into electricity. “We currently need fast solutions on how to temporarily take gas-fired power plants out of the market,” said Lower Saxony’s energy minister Olaf Lies (SPD) on the restart in Mehrum.

The coal-fired power plant, built in 1979, has a net output of 690 MW and an efficiency of 40.5 per cent. It is operated by the Czech company EPH. In addition to EPH, other operators are working on recommissioning their plants – among them the Essen-based Steag Group. The company is ready to put up to five of its coal-fired power plants back on the market, a spokesperson told energate. In view of the high electricity prices, coal-fired power generation is generally lucrative, and Steag would like to participate with its portfolio of 2,300 MW of capacity, but the company sees several obstacles: The legislator prescribes the provision of coal quantities that should enable operation for 30 full-load days. In Steag’s case, this would mean up to 660,000 tonnes of hard coal. “Transporting them is a logistical problem that still needs to be solved.” Financially, too, the procurement would be quite demanding. At current prices, it would cost about a quarter of a billion euros. The short validity period of the ordinance accompanying the EKBG until the end of April 2023 further increases the entrepreneurial risk, the spokesperson added.

The Karlsruhe-based energy company EnBW has five coal-fired units in the grid reserve. These start exclusively at the instruction of the responsible transmission system operator Transnet BW and this will not change for the time being, it said when asked. “These blocks will not return to the market in the course of the EKBG, but will remain in the grid reserve.”

Besides Steag, other companies are being considered for a power plant return, including the financially troubled Uniper group. According to media reports, however, a decision on a capacity of more than 2,000 MW has not yet been made